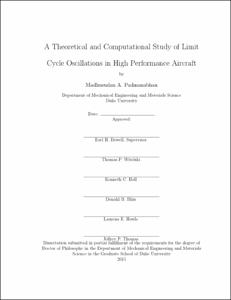 High performance fighter aircraft such as the F-16 experience aeroelastic Limit Cycle Oscillations (LCO) when they carry certain combinations of under-wing stores. This `store-induced LCO' causes serious problems including airframe fatigue, pilot discomfort and loss of operational effectiveness. The usual response has been to restrict the stores carriage envelope based on flight test experience, and accept the accompanying reduction in mission performance.

Although several nonlinear mechanisms - structural as well as aerodynamic, have been proposed to explain the LCO phenomenon, their roles are not well understood. Consequently, existing models are unable to predict accurately AND reliably the most critical LCO properties, namely onset speed and response level. On the other hand, the more accurate Computational Fluid Dynamics (CFD) based time marching methodology yields results at much greater expense and time. Clearly, there is a critical need to establish methods that are more rapid while providing accurate predictions more in line with flight test results than at present. Such a capability will also aid in future aircraft design and usage.

This work was undertaken to develop a better understanding of nonlinear aeroelastic phenomena, and their relation to classical flutter and divergence, with a particular focus on store-induced LCO in high performance fighter aircraft. The following systems were studied: (1) a `simple' wing with a flexible and nonlinear root attachment, (2) a `generic' wing with a flexible and nonlinear wing-store attachment and (3) the F-16 aircraft, again with nonlinear wing-store attachments.

While structural nonlinearity was present in all cases, steady flow aerodynamic nonlinearity was also included in the F-16 case by the use of a Computational Fluid Dynamics model based on the Reynolds Averaged Navier Stokes (RANS) equations. However, dynamic linearization of the CFD model was done for the present computations. The computationally efficient Harmonic Balance (HB) nonlinear solution technique was a key component of this work, with time marching simulations and closed form solutions being used selectively to confirm the findings of the HB solutions. The simple wing and the generic wing were both modeled as linear beam-rods whose displacements were represented using the primitive modes method. The wing aerodynamic model was linear (quasi-steady for the simple wing and based on the Vortex Lattice Method for the generic wing), and the store aerodynamics were omitted.

The presence of a cubic restoring force (of hardening or softening type, in stiffness or in damping) at the root of the simple wing led to several interesting results and insights. Next, various nonlinear mechanisms including cubic restoring force, freeplay and friction were introduced at the wing-store attachment of the generic wing and these led to a still greater variety in behavior. General relationships were established between the type of nonlinearity and the nature of the resulting response, and they proved very useful for tailoring the F-16 study and interpreting its results.

The Air Force Seek Eagle Office/Air Force Research Laboratory provided a modal structural model of an LCO-prone store configuration of the F-16 aircraft with stores included. In order to investigate a range of stores attachment configurations, the analysis required modification of the stiffness and damping of the wing-store attachment. Since the Finite Element model of the wing and store structure was not available, the modification was achieved by subtracting the store and adding it back with the necessary changes to the store or attachment using a dynamic decoupling/coupling technique. The modified models were subjected to flutter/LCO analysis using the Duke Harmonic Balance CFD RANS solver, and the resulting flutter boundaries were used in combination with the HB method to derive LCO responses due to the wing-store attachment nonlinearity.

Comparisons were made between the simulation results and the F-16 flight test LCO data. While multiple sources of nonlinearity are probably responsible for the wide range of observed LCO behavior, it was concluded that cubic softening stiffness and positive cubic damping were the more likely structural mechanisms causing LCO, in addition to nonlinear aerodynamics.