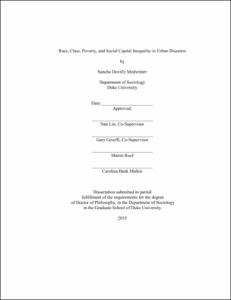 This dissertation is a case study of processes of inequality in disaster response in neighborhoods recently devastated by natural disaster. The context is New York City beginning from the immediate aftermath of Superstorm Sandy on October 29, 2012. Specifically, this is a multilevel, multi-process comparative examination of emergent racial and class inequality (1) between two storm-impacted neighborhoods on the Rockaway peninsula and Brooklyn, and (2) two adjacent neighborhoods within The Rockaways. The fulcrum of the study is to understand a cumulative process by which racial minority and urban poor residents residing in cities fare worse after a disaster relative to their white and non-poor neighbors. To examine this question, over the course of two years this study collected data through interviews with 120 respondents who are residents, community leaders, field-site managers, workers and volunteers from various disaster relief entities (FEMA, New York State agencies, a large NGO, and local NPOs including small and Large Churches) working and living in these post-disaster contexts.

The first part of the analysis traces how the spatial organization, practice and culture of federal and state institutional actors privilege white and middle class residents over minorities and the poor. For this analysis, I comparatively analyze the process of response building through agency and organizational ties across Canarsie in Brooklyn and Westville and Eastville in "The Rockaways." The aspects of response that I compare primarily focus on decisions, actions, beliefs and expectations of management of these relief centers run by FEMA, Churches and local state governmental agencies in the respective neighborhoods. These managers are "on the ground" field site managers for the various centers.

Drilling down from the institutional to the social network environment, a significant part of this research focuses on relational-level comparisons of resident-responder interactions and informational and resource exchanges in and around warming and distributional centers of one central large NGO and one central local NPO located in Westville and Eastville, on the Rockaway Peninsula. This part of the study uses the setting of a natural disaster to examine how and why poor and minority residents living in proximity to affluent and white residents are less inclined to convert social network opportunities into social capital. Although these neighborhoods receive similar types of aid through a large NGO and FEMA, the combination of racial and class characteristics of these neighborhoods and their residents influence the relational dynamics of response, with race and class consequences in receiving disaster assistance.

The main conclusions from this research are (1) at the institutional network level, organizational social capital through organization agglomeration, hosting and coalition building led to a "nucleus of relief" in communities endowed with spatial privilege and the presence of large churches. (2) At the social network level, while all residents generate and benefit from crisis capital, which has short term benefits, whites are better positioned to create social capital which has long-term benefits, despite desegregation of interactional space.

Together these findings challenge current explanations of minority network disadvantage which emphasize macro-level segregation and deficient networks. The findings of this research in fact suggest that despite opportunities for "mixing," inequalities emerge through racialized interactions that inhibit translation and development of new social ties into lasting resources among low-income minorities who are living and surviving in the same areas as whites. The findings also contribute to the disaster literature by showing how race infiltrates institutional and spatial aspects of response that are different from arguments of prejudicial discrimination or merely poor coordination. The emphasis on structural racialization processes is also a much needed consideration in disaster research which tends to focus on quantifying disaster outcomes by racial characteristics of individuals or community demographic composition.