Characterization and Applications of Force-induced Reactions 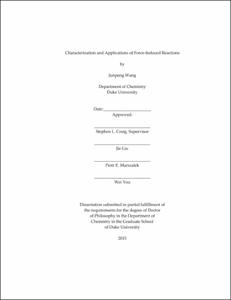 Just as heat, light and electricity do, mechanical forces can also stimulate reactions. Conventionally, these processes - known as mechanochemistry - were viewed as comprising only destructive events, such as bond scission and material failure. Recently, Moore and coworkers demonstrated that the incorporation of mechanophores, i.e., mechanochemically active moieties, can bring new types of chemistry. This demonstration has inspired a series of fruitful works, at both the molecular and material levels, in both theoretical and experimental aspects, for both fundamental research and applications. This dissertation evaluates mechanochemical behavior in all of these contexts.

At the level of fundamental reactivity, forbidden reactions, such as those that violate orbital symmetry effects as captured in the Woodward-Hoffman rules, remain an ongoing challenge for experimental characterization, because when the competing allowed pathway is available, the reactions are intrinsically difficult to trigger. Recent developments in covalent mechanochemistry have opened the door to activating otherwise inaccessible reactions. This dissertation describes the first real-time observation and quantified measurement of four mechanically activated forbidden reactions. The results provide the experimental benchmarks for mechanically induced forbidden reactions, including those that violate the Woodward-Hoffmann and Woodward-Hoffmann-DePuy rules, and in some cases suggest revisions to prior computational predictions. The single-molecule measurement also captured competing reactions between isomerization and bimolecular reaction, which to the best of our knowledge, is the first time that competing reactions are probed by force spectroscopy.

Most characterization for mechanochemistry has been focused on the reactivity of mechanophores, and investigations of the force coupling efficiency are much less reported. We discovered that the stereochemistry of a non-reactive alkene pendant to a reacting mechanophore has a dramatic effect on the magnitude of the force required to trigger reactivity on a given timescale (here, a 400 pN difference for reactivity on the timescale of 100 ms). The stereochemical perturbation has essentially no measurable effect on the force-free reactivity, providing an almost perfectly orthogonal handle for tuning mechanochemical reactivity independently of intrinsic reactivity.

On the materials level, the inevitable stress in materials during usage causes bond breakage, materials aging and failure. A strategy for solving this problem is to learn from biological materials, which are capable to remodel and become stronger in response to the otherwise destructive forces. Benzocyclobutene has been demonstrated to mechanically active to ortho-quinodimethide, an intermediate capable for [4+4] dimerization and [4+2] cycloaddition. These features make it an excellent candidate for and synthesis of mechanochemical remodeling. A polymer containing hundreds of benzocyclobutene on the backbone was synthesized. When the polymer was exposed to otherwise destructive shear forces generated by pulsed ultrasound, its molecular weight increased as oppose to other mechanophore-containing polymers. When a solution of the polymer with bismaleimide was subjected to pulsed ultrasonication, crosslink occurred and the modulus increased by two orders of magnitude.