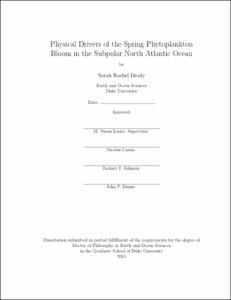 The timing of the spring phytoplankton bloom in the subpolar North Atlantic Ocean has important consequences for the marine carbon cycle and ecosystems. There are currently several proposed mechanisms to explain the timing of this bloom. The conventional theory holds that the bloom begins when the ocean warms and the seasonal mixed layer shoals in the spring, decreasing the depth to which phytoplankton are mixed and increasing the light available to the population. Recent work has attributed the beginning of the bloom to decreases in turbulence within the upper ocean, driven by the onset of positive heat fluxes or decreases in the strength of local winds. Other studies have focused on the increase in the seasonal mixed layer in the winter as a driver of changes in ecosystem interactions and a control on the spring bloom. Finally, submesoscale eddies, occurring as a result of lateral density gradients, have been proposed as a stratification mechanism that can create phytoplankton blooms prior to the onset of ocean surface warming.

This dissertation critically examines and compares the proposed theories for the initiation of the spring bloom and draws on these theories to propose a new framework: that blooms begin when the active mixing depth shoals, a process generally driven by a weakening of surface heat fluxes and consequent shift from convective mixing to wind-driven mixing. Using surface forcing data, we develop a parameterization for the active mixing depth from estimates of the largest energy-containing eddies in the upper ocean.

Using in situ records of turbulent mixing and biomass, we find that the spring phytoplankton bloom occurs after mixing shifts from being driven by convection to being driven by wind, and that biomass increases as the active mixing depth shoals. Using remote sensing data, we examine patterns of bloom initiation in the North Atlantic at the basin scale, compare current theories of bloom initiation, and find that the shoaling of the active mixing depth better predicts the onset of the bloom across the North Atlantic subpolar basin and over multiple years than do other current theories. Additionally, using a process study model, we evaluate the importance of submesoscale eddy-driven stratification as a control on the initiation of the spring bloom, determining that this mechanism has a relatively minor effect on alleviation of phytoplankton light limitation. Finally, we describe potential techniques and tools to examine whether interannual variability in the active mixing depth acts as a control on variability in the timing of the spring bloom.