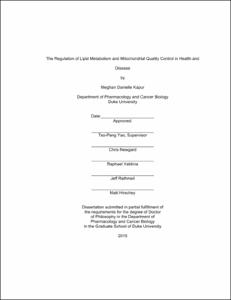 Advances in modern medicine have helped to prolong human life. These advancements coupled with an ever-increasing population means that diseases associated with aging will become more prevalent in the coming years. As such, it is critical to understand the pathogenesis of disease where aging is the main risk factor. While not widely known, age is in fact a large risk factor in development of obesity and metabolic syndrome. More widely known and discussed are the neurodegenerative diseases that occur late in life. While age as a risk factor is a common point between these types of pathology, there are other similarities, such as the interaction between lipid metabolism and mitochondrial health.

To study the overlap between obesity and neurodegeneration, we investigated two pathways that regulate both. First, we find that loss of cytoplasmic deacetylase HDAC6 leads to aberrant accumulation of lipid in vitro and in vivo. HDAC6 knock-out (KO) mice gain more weight than WT counterparts after a high-fat diet regimen. Additionally, the intermediary metabolism of cells lacking HDAC6 is disrupted as they increase glucose uptake while downregulating fatty acid oxidation. HDAC6 not only plays a role in lipid metabolism, but regulates mitochondrial dynamics. Upon glucose-withdrawal, HDAC6 KO cells fail to elongate their mitochondria and display increased levels of mitochondrial toxic by-products. Therefore, HDAC6 has critical roles in lipid homeostasis and mitochondrial health.

The other pathway we investigated is critical in neurodegenerative disease, Parkinson's disease. Parkin, an E3 ubiquitin ligase, flags damaged mitochondria for destruction so they do not poison the other functional organelles. We found that Parkin promotes lipid remodeling at the surface of the mitochondria. Phosphatidic acid (PA) accumulates shortly after mitochondrial damage while diacylglycerol (DAG) appears several hours later. This lipid accumulation is dependent upon Parkin's translocation and E3 ligase activity. Additionally, we found that lipin-1, a PA phosphatase, and endophilin B1 (EndoB1) are critical for DAG accumulation and effective mitochondrial clearance.

Through this work, we show that two proteins critical in quality control mechanisms also play significant roles in energy homeostasis. We aim to highlight this overlap and posit that common diseases of aging, though presenting differently, might have disruptions in the same basic process.