Wildcat of the Streets: Race, Class and the Punitive Turn in 1970s Detroit 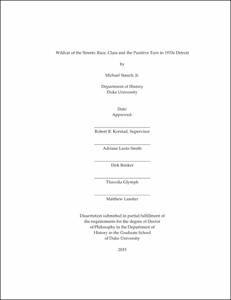 This dissertation is a social history of the city of Detroit in the 1970s. Using archives official and unofficial - oral histories and archived document collections, self-published memoirs and legal documents, personal papers and the newspapers of the radical press - it portrays a city in flux. It was in the 1970s that the urban crisis in the cities of the United States crested. Detroit, as had been the case throughout the twentieth century, was at the forefront of these changes. This dissertation demonstrates the local social, political, and economic circumstances that contributed to the dramatic increase in prison populations since the 1970s with a focus on the halls of government, the courtroom, and city streets. In the streets, unemployed African American youth organized themselves to counteract the contracted social distribution allocated to them under rapidly changing economic circumstances. They organized themselves for creative expression, protection and solidarity in a hostile city, and to pursue economic endeavors in the informal economy. They sometimes committed crimes. In the courts, Wayne County Juvenile Court Judge James Lincoln, a liberal Democrat long allied with New Deal political alliances, became disenchanted with rehabilitative solutions to juvenile delinquency and embraced more punitive measures, namely incarceration. In city hall, Coleman Young, the city's first African American mayor, confronted this crisis with a form of policing that concentrated predominately on the city's unemployed African American youth, and the result was the criminalization of poverty and race we have come to understand as mass incarceration.