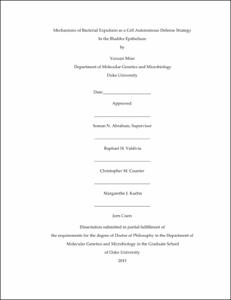 Due to its close proximity to the gastrointestinal tract, the human urinary tract is

subjected to constant barrage by gut-­associated bacteria. However, for the most part, this tract has resisted infection by various microbes. The impregnability of the urinary tract to microbial colonization is attributable to the ability of the bladder to promptly sense and mount robust responses to microbial challenge. A powerful mechanism for the elimination of invading bacteria was recently described in bladder epithelial cells, involving non-­lytic ejection of intracellular bacteria back into the extracellular milieu. In spite of the effectiveness of this defense strategy, much of the underlying mechanisms surrounding how this powerful cellular defense activity detects intracellular UPEC and shuttles them from their intracellular location to the plasma membrane of BECs to be exported remains largely a mystery.

initially processed via autophagy, the conventional degradative pathway, then delivered

into multivesicular bodies (MVBs) and encapsulated in nascent intraluminal vesicle membrane. We further show the bacterial expulsion is triggered when intracellular UPEC follow the natural degradative trafficking pathway and reach lysosomes and attempt to neutralize its pH to avoid degradation. This pathogen-­mediated activity is detected by mucolipin TRP channel 3 (TRPML3), a transient receptor potential cation channel localized on lysosomes, which spontaneously initiates lysosome exocytosis resulting in expulsion of exosome-­encased bacteria. These studies reveal a cellular default system for lysosome homeostasis and also, how it is coopted by the autonomous defense program to clear recalcitrant pathogens.