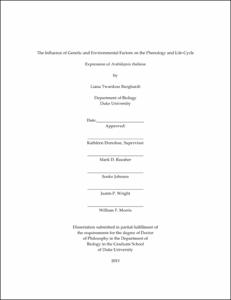 This dissertation examines the processes that generate phenotypic variation in life cycles in seasonal environments. Collectively, a life cycle describes the stages an organism passes through during a generation. The timing, or phenology, of these transitions is often influenced by both environmental and allelic variation. Using the model organism Arabidopsis thaliana and both empirical and modeling approaches, I examine how correlations between life-cycle transitions, environment-dependent allelic effects, and epistasis generate patterns of life-cycle variation both within and between generations. In my first chapter, I use experiments to determine that many combinations of genetic, environmental, and developmental factors can create similar germination phenotypes, that maternal effects can influence phenotypes more than genetic differences, and that cross-generational effects can reduce variation in germination timing despite variation in flowering and dispersal time. In my second chapter, I use a modeling approach to consider the entire life cycle. I find that environmental variation is a major driver of phenotypic variation, and that considering the known geographic distribution of allelic variation across the range improves the match of model predictions to phenotypes expressed in natural populations. Specifically, variation in dormancy generated in the previous generation is predicted to cause life-cycle differences within a location, and the geographic distribution of allelic variation in dormancy interacts with local climatic environments to canalize an annual life history across the range. Finally, I test if allelic and environmental variation that affects early life stages can influence the environment experienced during reproduction. This environment determines both the time available for reproduction and the environment experienced during senescence. By implementing simple survival rules for flowering plants in the model, I show that time available for a plant to reproduce depends on earlier phenological traits and varies widely from year to year, location to location, and genotype to genotype. If reproductive trade-offs that underlie the evolution of senescence are environmentally sensitive, these results suggest that genetic variation in earlier life-stage transitions might shape senescence rates and whether they are environmentally responsive. In sum, my dissertation demonstrates the importance of pleiotropy, environment-dependent allelic expression, and epistasis in defining life-cycle variation, and proposes a novel way of predicting these relationships and complex life cycles under seasonal conditions.