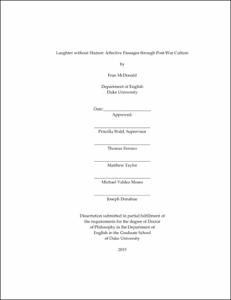 There is a scene in Margaret Atwood's dystopian novel The Handmaid's Tale in which Offred, eponymous handmaid to the totalitarian theocracy that now governs America, is overwhelmed by the sudden need to laugh. Spasms wrack her body. She crams her hands into her mouth, she fears she will vomit, she imagines she is giving birth. Finally, well aware that her convulsions would register as subversion to a regime that polices bodies and supervises affects, Offred crawls into a cupboard in an effort to "compose herself." Laughter without Humor arose from this passage, from the inexplicable laughter that overwhelms Offred's disciplined body and demolishes her carefully composed self. The suspicion that laughter challenges the self-contained "I" has always been buried in our idioms: the subject "dissolves" in laughter, the individual proliferates suddenly into a "barrel" or "bundle" of laughs, ontological boundaries are breached as we "roar" or "bark" with laughter. In the twentieth-century, laughter appears across a wide variety of artistic forms as a vigorous affective force capable of convulsing being and exploding calcified structures of thought. This project examines the interrelationship between fictional depictions of humorless laughter and the dissolution and reconfiguration of the subject in poststructuralist theory.

The field of humor studies, which counts Aristotle, Kant, and Freud among its contributors, avoids laughter's irrational properties and instead offers scientific reasons--physiological, evolutionary, and psychological--as to why we laugh. In contrast, Laughter without Humor seeks to understand laughter on its own terms by posing an alternate question: what does laughter do? In four chapters, I consider four discrete strains of humorless laughter: the dankly corporeal flow of a specifically female "dangerous laughter" (Chapter 1), the blustering wave of "ecstatic laughter" associated with mystic experience (Chapter 2), an infectious "grotesque laughter" that tosses the individual back and forth between ontological categories with uncanny fervor (Chapter 3), and the shattering shriek of "atomic laughter" that indexes the experience of total nuclear annihilation (Chapter 4). In particular I focus on literary work from William James, André Breton, T.S. Eliot, Nathanael West, Henri Michaux, Kurt Vonnegut, Stanley Kubrick, Margaret Atwood, and Steven Millhauser; and on philosophical texts by Friedrich Nietzsche, Georges Bataille, Michel Foucault, Gilles Deleuze, Hélène Cixous, Catherine Clément, Julia Kristeva, Édouard Glissant, Brian Massumi, and Eugenie Brinkema. I ultimately argue that the messy burst of laughter disturbs the intelligibility of both self and text. In so doing, it clears a space to imagine new, provisional models of personhood that are based on affective entanglement rather than rational self-containment.