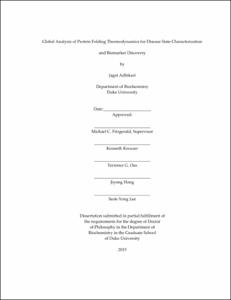 Protein biomarkers can facilitate the diagnosis of many diseases such as cancer and they can be important for the development of effective therapeutic interventions. Current large-scale biomarker discovery and disease state characterization studies have largely focused on the global analysis of gene and protein expression levels, which are not directly tied to function. Moreover, functionally significant proteins with similar expression levels go undetected in the current paradigm of using gene and protein expression level analyses for protein biomarker discovery. Protein-ligand interactions play an important role in biological processes. A number of diseases such as cancer are reported to have altered protein interaction networks. Current understanding of biophysical properties and consequences of altered protein interaction network in disease state is limited due to the lack of reproducible and high-throughput methods to make such measurements. Thermodynamic stability measurements can report on a wide range of biologically significant phenomena (e.g., point mutations, post-translational modifications, and new or altered binding interactions with cellular ligands) associated with proteins in different disease states. Investigated here is the use of thermodynamic stability measurements to probe the altered interaction networks and functions of proteins in disease states. This thesis outlines the development and application of mass spectrometry based methods for making proteome-wide thermodynamic measurements of protein stability in multifactorial complex diseases such as cancer. Initial work involved the development of SILAC-SPROX and SILAC-PP approaches for thermodynamic stability measurements in proof-of-concept studies with two test ligands, CsA and a non-hydrolyzable adenosine triphosphate (ATP) analogue, adenylyl imidodiphosphate (AMP-PNP). In these proof-of-principle studies, known direct binding target of CsA, cyclophilin A, was successfully identified and quantified. Similarly a number of known and previously unknown ATP binding proteins were also detected and quantified using these SILAC-based energetics approaches.