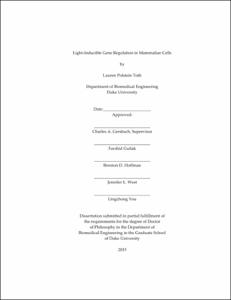 The growing complexity of scientific research demands further development of advanced gene regulation systems. For instance, the ultimate goal of tissue engineering is to develop constructs that functionally and morphologically resemble the native tissue they are expected to replace. This requires patterning of gene expression and control of cellular phenotype within the tissue engineered construct. In the field of synthetic biology, gene circuits are engineered to elucidate mechanisms of gene regulation and predict the behavior of more complex systems. Such systems require robust gene switches that can quickly turn gene expression on or off. Similarly, basic science requires precise genetic control to perturb genetic pathways or understand gene function. Additionally, gene therapy strives to replace or repair genes that are responsible for disease. The safety and efficacy of such therapies require control of when and where the delivered gene is expressed in vivo.

Unfortunately, these fields are limited by the lack of gene regulation systems that enable both robust and flexible cellular control. Most current gene regulation systems do not allow for the manipulation of gene expression that is spatially defined, temporally controlled, reversible, and repeatable. Rather, they provide incomplete control that forces the user to choose to control gene expression in either space or time, and whether the system will be reversible or irreversible.

The recent emergence of the field of optogenetics--the ability to control gene expression using light--has made it possible to regulate gene expression with spatial, temporal, and dynamic control. Light-inducible systems provide the tools necessary to overcome the limitations of other gene regulation systems, which can be slow, imprecise, or cumbersome to work with. However, emerging light-inducible systems require further optimization to increase their efficiency, reliability, and ease of use.

Initially, we engineered a light-inducible gene regulation system that combines zinc finger protein technology and the light-inducible interaction between Arabidopsis thaliana plant proteins GIGANTEA (GI) and the light oxygen voltage (LOV) domain of FKF1. Zinc finger proteins (ZFPs) can be engineered to target almost any DNA sequence through tandem assembly of individual zinc finger domains that recognize a specific three base-pair DNA sequence. Fusion of three different ZFPs to GI (GI-ZFP) successfully targeted the fusion protein to the specific DNA target sequence of the ZFP. Due to the interaction between GI and LOV, co-expression of GI-ZFP with a fusion protein consisting of LOV fused to three copies of the VP16 transactivation domain (LOV-VP16) enabled blue-light dependent recruitment of LOV-VP16 to the ZFP target sequence. We showed that placement of three to nine copies of a ZFP target sequence upstream of a luciferase or eGFP transgene enabled expression of the transgene in response to blue-light. Gene activation was both reversible and tunable based on duration of light exposure, illumination intensity, and the number of ZFP binding sites upstream of the transgene. Gene expression could also be spatially patterned by illuminating the cell culture through photomasks containing various patterns.

Although this system was useful for controlling the expression of a transgene, for many applications it is useful to control the expression of a gene in its natural chromosomal position. Therefore we capitalized on recent advances in programmed gene activation to engineer an optogenetic tool that could easily be targeted to new, endogenous DNA sequences without re-engineering the light inducible proteins. This approach took advantage of CRISPR/Cas9 technology, which uses a gene-specific guide RNA (gRNA) to facilitate Cas9 targeting and binding to a desired sequence, and the light-inducible heterodimerizers CRY2 and CIB1 from Arabidopsis thaliana to engineer a light-activated CRISPR/Cas9 effector (LACE) system. We fused the full-length (FL) CRY2 to the transcriptional activator VP64 (CRY2FL-VP64) and the N-terminal fragment of CIB1 to the N-, C-, or N- and C- terminus of a catalytically inactive Cas9. When CRY2-VP64 and one of the CIBN/dCas9 fusion proteins are expressed with a gRNA, the CIBN/dCas9 fusion protein localizes to the gRNA target. In the presence of blue light, CRY2FL binds to CIBN, which translocates CRY2FL-VP64 to the gene target and activates transcription. Unlike other optogenetic systems, the LACE system can be targeted to new endogenous loci by solely manipulating the specificity of the gRNA without having to re-engineer the light-inducible proteins. We achieved light-dependent activation of the IL1RN, HBG1/2, or ASCL1 genes by delivery of the LACE system and four gene-specific gRNAs per promoter region. For some gene targets, we achieved equivalent activation levels to cells that were transfected with the same gRNAs and the synthetic transcription factor dCas9-VP64. Gene activation was also shown to be reversible and repeatable through modulation of the duration of blue light exposure, and spatial patterning of gene expression was achieved using an eGFP reporter and a photomask.

Finally, we engineered a light-activated genetic "on" switch (LAGOS) that provides permanent gene expression in response to an initial dose of blue light illumination. LAGOS is a lentiviral vector that expresses a transgene only upon Cre recombinase-mediated DNA recombination. We showed that this vector, when used in conjunction with a light-inducible Cre recombinase system,1 could be used to express MyoD or the synthetic transcription factor VP64-MyoD2 in response to light in multiple mammalian cell lines, including primary mouse embryonic fibroblasts. We achieved light-mediated upregulation of downstream myogenic markers myogenin, desmin, troponin T, and myosin heavy chains I and II as well as fusion of C3H10T½ cells into myotubes that resembled a skeletal muscle cell phenotype. We also demonstrated LAGOS functionality in vivo by engineering the vector to express human VEGF165 and human ANG1 in response to light. HEK 293T cells stably expressing the LAGOS vector and transiently expressing the light-inducible Cre recombinase proteins were implanted into mouse dorsal window chambers. Mice that were illuminated with blue light had increased microvessel density compared to mice that were not illuminated. Analysis of human VEGF and human ANG1 levels by enzyme-linked immunosorbent assay (ELISA) revealed statistically higher levels of VEGF and ANG1 in illuminated mice compared to non-illuminated mice.

In summary, the objective of this work was to engineer robust light-inducible gene regulation systems that can control genes and cellular fate in a spatial and temporal manner. These studies combine the rapid advances in gene targeting and activation technology with natural light-inducible plant protein interactions. Collectively, this thesis presents several optogenetic systems that are expected to facilitate the development of multicellular cell and tissue constructs for use in tissue engineering, synthetic biology, gene therapy, and basic science both in vitro and in vivo.