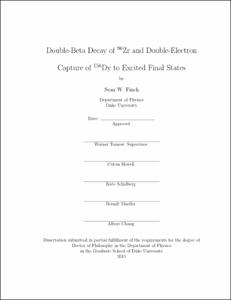 Two separate experimental searches for second-order weak nuclear decays to excited final states were conducted. Both experiments were carried out at the Kimballton Underground Research Facility to provide shielding from cosmic rays. The first search is for the two-neutrino double-beta decay of 96Zr to excited final states of the daughter nucleus, 96Mo. As a by product of this experiment, the beta decay of 96Zr was also investigated. Two coaxial high-purity germanium detectors were used in coincidence to detect gamma rays produced by the daughter nucleus as it de-excited to the ground state. After collecting 1.92 years of data with 17.91 g of enriched 96Zr, half-life limits at the level of 10^20 yr were produced. Measurements of this decay are important to test neutrinoless double-beta decay nuclear matrix element calculations, which are necessary to extract the neutrino mass from a measurement of the neutrinoless double-beta decay half-life.

The second experiment is a search for the resonantly-enhanced neutrinoless double-electron capture decay of 156Dy to excited states in 156Gd. Double-electron capture is a possible experimental alternative to neutrinoless-double beta decay, which could distinguish the Dirac or Majorana nature of the neutrino. Two clover high-purity germanium detectors were used in coincidence to investigate the decay. A 213.5 mg enriched 156Dy sample was observed for 0.635 year, producing half-life limits of 10^17 yr. The limits produced by both of these experiments are currently the most stringent limits available for these decays.