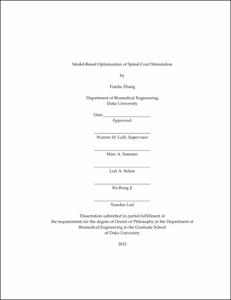 Chronic pain is a distressing, prevalent, and expensive condition that is not well understood and difficult to treat. Spinal cord stimulation (SCS) has emerged as a viable means of managing chronic pain when conventional therapies are ineffective, but the efficacy of SCS has improved little since its inception. The mechanisms underlying SCS, in particular the neuronal responses to SCS, are not well understood, and prior efforts to optimize SCS have focused on electrode design and spatial selectivity without considering how the temporal aspects of SCS (stimulation frequency, pattern) may affect neuronal responses to stimulation. The lack of a biophysical basis in prior attempts to optimize therapy may have contributed to the plateau in the clinical efficacy of SCS over time. This dissertation combines computational modeling and in vivo electrophysiological approaches to investigate the effects of SCS on sensory neuron activity in the dorsal horn and uses the insights gained from these experiments to design novel temporal patterns for SCS that may be more effective than conventional therapy.

To study the mechanisms underlying SCS, we constructed a biophysically-based network model of the dorsal horn circuit consisting of interconnected dorsal horn interneurons and a wide dynamic range (WDR) projection neuron and representations of both local and surround receptive field inhibition. We validated the network model by reproducing cellular and network responses relevant to pain processing including wind-up, A-fiber mediated inhibition, and surround receptive field inhibition. To quantify experimentally the responses of spinal sensory projection neurons to SCS, we recorded the responses of antidromically identified sensory neurons in the lumbar spinal cord during 1-150 Hz SCS in both healthy rats and neuropathic rats following chronic constriction injury (CCI). In a subset of rats, we additionally assessed the impact of GABAergic inhibition on spinal neuron responses to SCS by conducting SCS experiments following the intrathecal administration of bicuculline, a GABAA receptor antagonist, and CGP 35348, a GABAB receptor antagonist. Finally, we used the computational model to design non-regular temporal patterns capable of inhibiting sensory neuron activity more effectively than conventional SCS and at lower equivalent stimulation frequencies than clinical standard 50 Hz SCS, and we experimentally validated model predictions of the improved efficacy of select patterns against conventional SCS.

Computational modeling revealed that the response of spinal sensory neurons to SCS depends on the SCS frequency; SCS frequencies of 30-100 Hz maximally inhibited the model WDR neuron consistent with clinical reports, while frequencies under 30 Hz and over 100 Hz excited the model WDR neuron. SCS-mediated inhibition was also dependent on GABAergic inhibition in the spinal cord: reducing the influence GABAergic interneurons by weakening their inputs or their connections to the model WDR neuron reduced the range of optimal SCS frequencies and changed the frequency at which SCS had a maximal effect. Experimentally, we observed that the relationship between SCS frequency and projection neuron activity predicted by the Gate Control circuit described a subset of observed SCS-frequency dependent responses but was insufficient to account for the heterogeneous responses measured experimentally. In addition, intrathecal administration of bicuculline, a GABAA receptor antagonist, increased spontaneous and evoked activity in projection neurons, enhanced excitatory responses to SCS, and reduced inhibitory responses to SCS, consistent with model predictions. Finally, computational modeling of dual frequency SCS, implemented by delivering two distinct frequencies simultaneously to distinct fiber populations, revealed frequency pairs that were more effective at inhibiting sensory neuron activity than equivalent conventional SCS and at lower average frequencies than clinically employed 50 Hz SCS. Experimental assessments of the effect of dual frequency SCS on spinal sensory neurons confirmed model predictions of greater efficacy at lower equivalent stimulation frequencies and suggest the use of non-regular temporal patterns as a novel approach to optimizing SCS. The outcomes of this dissertation are an improved understanding of the mechanisms underlying SCS, computational and experimental tools with which to continue the development and improvement of SCS. The insights and knowledge gained from the work described in this dissertation may result in translational applications that significantly improve the therapeutic outcomes of SCS and the quality of life of individuals affected by chronic pain.