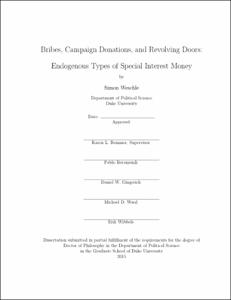 Special interest money enters politics in a number of ways: Politicians solicit contributions that help in their election campaigns; they enrich themselves while in office by accepting bribes; or, increasingly in many countries, they go through the "revolving door" and take up lucrative post-government jobs in companies that were affected by their decisions in office. The central argument I make in this dissertation is that these different types of special interest money can act as functional substitutes and that their prevalence is a strategic choice. I examine this strategic choice theoretically and empirically, and provide insights into the consequences it has for policy and voters. I focus on two main factors: First, what consequences does the legal environment have? Second, what is the effect of the political environment?

Chapter 1 lays the theoretical groundwork. I study a formal model of political competition that determines whether and how special interest money enters politics. I show that laws criminalizing bribery or restricting campaign contributions lead to substitution effects and make other types of special interest money more common, in particular the revolving door. I also study the effect of legal restrictions on equilibrium policy and demonstrate that it only moves policy towards the median voter under certain circumstances. Higher political competitiveness leads incumbents to solicit campaign contributions, whereas the absence of competitiveness provides leeway for personal enrichment.

I test the effect of the legal and the political environment on the types of special interest money empirically, using newly assembled data from the world's two largest democracies. Chapter 2 examines the effect of the degree of political competition on the choice between personal enrichment while in office and campaign spending in India. Making use of detailed mandatory asset disclosure data of state assembly members that run in consecutive elections, I show that candidates with ties to business groups increase their wealth to a higher degree when they are electorally secure. Conversely, they hold larger cash reserves, which are crucial in campaigns, the less electorally secure they are. Using a survey experiment, I show that the way special interest money is used matters to voters.

Chapter 3 asks where tougher regulations of money in politics comes from. I argue that political entrepreneurs running on an anti-corruption platform play an important role and provide a simple formal exposition of the conditions under which voters are willing to vote for them. The implications of the model are tested for one of the most successful electoral performances of an anti-corruption party of our time: the 2013 debut of the Aam Aadmi Party (AAP) in state elections in Delhi in India. Analyzing three rounds of pre-election surveys with a total of more than 40,000 respondents and election outcomes at the polling-booth level, I provide empirical support for the central insights of the formal model.

Finally, in Chapter 4 I study the effect of stricter regulations of bribery and campaign contributions on the revolving door, exploiting regulatory variation among the 50 state legislatures of the United States. Using a series of multilevel regression models, I show that former legislators are more likely to go through the revolving door and become lobbyists in states that make politicians less dependent on campaign contributions from special interests and that make it harder to earn money while in office. This suggests that politicians' movement into the private sector upon exiting office can act as a substitute for other types of special interest money.