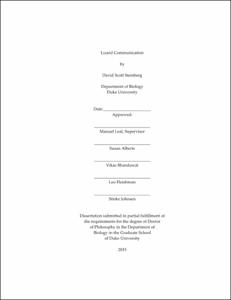 The evolution of animal signals is driven largely by characteristics of the signaling environment and properties of receiver sensory systems. Selection favors signal traits that increase the probability that a signal will stimulate the sensory systems of intended receivers, but not potential predators, under average environmental conditions. However, environmental conditions often fluctuate, which means that a given signal property may not be equally effective at all times. One potential mechanism that an organism might employ to overcome this challenge is to modulate its signal properties as environmental conditions change in order to maintain stimulation of the receiver sensory system. In this dissertation, I explore the possible role of signal modulation using the motion detection and communication systems of tropical Anolis lizards.

In order to assess the possible role of signal modulation in the communication behavior of anoles, it was necessary to determine the properties of their motion detection systems. In Chapter 2, I tested whether motion detection properties are conserved across species of anole. I adapted a behavioral assay to quantify the spatial parameters of the motion detectors of three species of Puerto Rican Anolis lizards, with each preferring a distinct structural habitat type. I then compared the results to data previously collected for anoles from Cuba, Puerto Rico, and Central America. Results indicated that all species share a minimum amplitude threshold for detecting moving objects and exhibit multiple peaks in relative response to various motion amplitudes. Fine-scale interspecific differences in the number and values of response peaks were not correlated with structural niche. Overall, the study suggests that the motion detection systems of Anolis lizards are relatively conserved, which may help explain shared features of movement-based signals in anoles.

For mobile organisms, the spatial relationships of signaling individuals and intended receivers can be fluid. Such fluctuation in the distance between signalers and receivers can greatly impact signal efficacy, but it is unclear exactly how animals cope with this problem. In Chapter 3, I investigated whether signal modulation can serve as an effective strategy to cope with variation in the spacing of receivers in the environment by tuning a signal to maintain stimulation of the receiver sensory system. I evaluated this hypothesis by testing the use of modulation in the tropical lizard Anolis gundlachi in Puerto Rico. I first characterized the motion detection properties of the sensory system of A. gundlachi in the laboratory. I then measured the physical properties of movement-based headbob displays given during staged social encounters under natural conditions. I found a significant positive association between the maximum amplitude of headbob displays and the physical distance to intended receivers. Modulation occurred in response to small-scale changes in signaler-receiver distance, and signalers gave displays that fell within a range of amplitudes predicted to optimally stimulate the visual system of A. gundlachi. These findings strongly suggest that modulation of the physical properties of motion-based signals can be an effective mechanism to tune signals to both characteristics of receiver sensory systems and receiver distance, and can serve as a behavioral strategy to cope with relatively frequent changes in the spacing of individuals.

Although signaling individuals must effectively capture and hold the attention of intended conspecific receivers, they must also limit eavesdropping by potential parasites or predators. However, predation pressure can vary over the course of an individual's lifetime, or over the course of a day, thereby altering signal efficacy. In Chapter 4, I tested the hypothesis that prey can modulate the physical properties of their signals or their display behavior in order to decrease conspicuousness and potentially limit predation risk. To do so, I conducted a manipulative experiment in nature to determine the effect of predation pressure on the properties of movement-based signals and the display rate of the semiarboreal lizard Anolis sagrei. I found that male anoles reduced the maximum amplitude of headbob displays but not the proportion of time spent signaling on islands onto which predators were introduced, in comparison to males from control islands lacking the predator. Characteristics of the motion detection system and social behavior of A. sagrei show that this reduction in amplitude also decreases signal active space, which might alter the reproductive success of signaling individuals. I suggest that future studies of predator-prey interactions consider the risk effects generated by changes in signals or signaling behavior to fully determine the influence of predation pressure on the dynamics of prey populations.