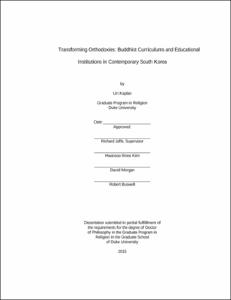 What do Buddhist monks really know about Buddhism? How do they imagine their religion, and more importantly, how does their understanding of their tradition differ from the one found in our typical introduction to Buddhism textbooks? In order to address these fundamental questions, this dissertation concentrates on the educational programs and curricular canons of Korean Buddhism. It aims to find out which part of their enormous canonical and non-canonical literature do Korean Buddhist professionals choose to focus on as the required curriculum in their training (and what do they leave out), why is it chosen and by whom, and how does this specific education shape their understanding of their own religion and their roles within it. It tracks down the 20th-century invention of the so-called `traditional' Korean monastic curriculum and delineates the current 21st-century curricular reforms and the heated debates surrounding them. Ultimately, it illustrates how instead of Buddhist academics learning from the Buddhists about Buddhism, it is actually often the Buddhists in their monasteries who end up simulating the educational agendas of Buddhist studies.

Research for this work involved diverse methodologies. Multiple-sited ethnographic fieldwork in monasteries was supplemented by archival digging in the Chogye Order's headquarters in Seoul and textual analysis of historical records, Buddhist media reports, and online blogs. I have visited the current official 17 monastic seminaries in Korea, as well as many of the new specialized monastic graduate institutes and lay schools, interviewed teachers and students on site, and inspected classrooms and schedules. During winter 2013-4 I have conducted a full-scale participant observation attending the Buddhist lay school of Hwagyesa, during which I engaged some of my classmates with in-depth interviews, and distributed a written attitude survey among the class.