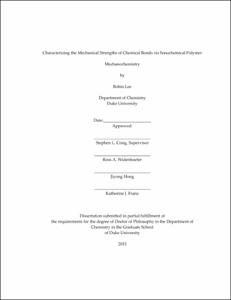 Using these methods, the relative mechanical strengths of triazoles were also investigated. Random copolymers containing either 1,4-triazole, 1,5-triazole, or indole were synthesized via entropy driven ring opening metathesis co-polymerization. Solutions of those polymers were subjected to pulsed ultrasound for 4 hours and M4h measured was less than the M4h of poly(gDCC). Taken together, these results suggest that the introduction of these heterocycles does weaken the polymer main chain, but not through mechanically assisted cycloreversion.