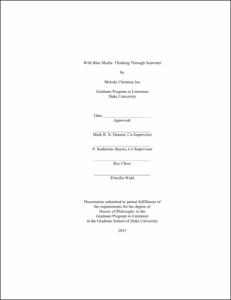 Dwelling with the alterity of the deep sea, my dissertation, "Wild Blue Media: Thinking Through Seawater," considers how the ocean environment produces cognitively estranging conditions for conceptualizing media and media theory. Concepts in media theory have thus far exhibited what I call a "terrestrial bias," theorizing primarily dry technologies through a language whose metaphorics have developed through human lives lived on land, rather than in the volume of the sea. In order to better understand the "terrestrial bias" in media theory, I develop a critical method of "conceptual displacement" that involves submerging key concepts in media theory underwater, engaging both literary texts and digital media. Specifically, I turn to Vilém Flusser's speculative fiction text "Vampyroteuthis Infernalis" to rethink "inscription"; ocean data visualizations to rethink "database"; and Jacques Cousteau's diving narratives to rethink "interface." Focusing on the ocean expands the critical discussion of the relation between embodiment and knowledge taken up by feminist science studies, and necessitates the inclusion of the environmental conditions for knowing; our milieu determines the possibilities of our media, and the way that we theorize our media in language. The ocean thus serves as an epistemic environment for thought that estranges us from our terrestrial habits of perception and ways of speaking about media, providing an important check on the limits of theory and terrestrial knowledge production, compelling us to have the humility to continually try to see--and describe--differently.

Turning to the ocean to rethink concepts in media theory makes apparent the interrelation between technology, desire, ecology, and the survival of human communities. While media theory has long been oriented toward preservation and culture contexts of recording, studying media in ocean contexts requires that we consider conditions that are necessarily but contingently ephemeral. Yet to engage with the ephemeral is also to engage with issues of mortality and the desire towards preservation--of what we want to remain--a question that especially haunts coastal communities vulnerable to sea-level rise. What the ocean teaches us, then, is to reflect on what we want our media technologies to do, as well as the epistemological question of how we are habituated to see and perceive. By considering the ocean as a medium and as an estranging milieu for reconsidering media concepts, I argue for an expanded definition of "media" that accounts for the technicity of natural elements, considering how media futures are not only a matter of new digital innovations, but fundamentally imbricated with the archaic materiality of the analog.