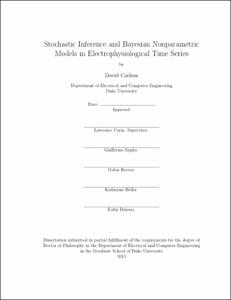 This thesis presents novel methods for processing electrophysiological time-series from simultaneously recorded electrodes in a brain, as well as providing new inference techniques that are more generally applicable. On spike sorting, I introduce Bayesian nonparametric methods to process multiple electrodes simultaneously, which improves performance when the electrode spacing is less than 100 microns. Furthermore, by treating the spike sorting problem as a single deconvolutional model instead of the conventional 2-step procedure with detection and clustering steps, the over- lapping spike problem is ameliorated. I then show that these detected neurons and their spike trains have dynamic relationships with local field potentials in distinct brain regions, and that the number of distinct relationships appears to cluster.

While these models approach an important scientific problem, it is necessary to have efficient inference in computationally-intensive models. To this end, I intro- duce novel methods for Variational Bayesian inference, as well as introducing a new stochastic inference algorithm called "Stochastic Spectral Descent," which mimics Stochastic Gradient Descent but operates in the Shatten-infinity norm. I show that several common machine learning problems naturally operate in the Shatten-infinity norm, and that this descent method mimics the natural geometry and greatly improves learning efficiency.