No "Idle Fancy:" The Imagination's Work in Poetry and Natural Philosophy from Sidney to Sprat 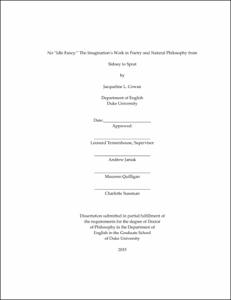 When debating the structure of the cosmos, Raphael delivers to Adam perhaps Milton's most famous line: "be lowly wise." With the promise to "justify the ways of God to men," Milton does not limit man's knowledge to base matters, but reclaims the heights of "other worlds" for the poet. Over the course of the seventeenth century, the natural philosophers' material explanations of the natural order were slowly gaining authority over other sources of knowledge, the poets prime among them. My dissertation takes up the competing early modern claims to knowledge that Milton lays down for Adam. I argue that natural philosophy, what today we call "science," emerged as the dominant authority over knowledge by appropriating the poet's imagination.

The poet's imagination had long revealed the divine hand that marked nature--a task that, as Sidney put it, merited the poet a "peerlesse" rank among other professions. For Bacon, Galileo, and Royal Society fellows, the poetic imagination revealed material explanations of nature's order that other orthodox models and methods could not. For the first decades of the seventeenth century, the imagination aligned poetry and natural philosophy as complementary pursuits of knowledge: Sidney's poet was to imagine a "golden" world that revealed the divine order, the material cause of which Bacon's natural philosopher was to discover in nature. But as the Royal Society fellows countered the claim that they peddled fancies, they severed ties with the poet. In one ingenious rhetorical move, Royal Society fellows proclaimed themselves to have perfected the poet's imaginative work, securing the imagination for natural philosophy while disavowing poetry as the product of an idle fancy. Such rhetoric proved as powerful then as it does now. For Margaret Cavendish, the poet occupies the supplemental role that "recreate[s] the mind" once it grows tired of the "serious" natural philosophical studies. After the Restoration, then, the important role of the poetic imagination would go largely unrecognized even as it set itself to work in what would become the separate disciplines of literature and science.