The Background to Politics in an Age of Pluralism and Polarization 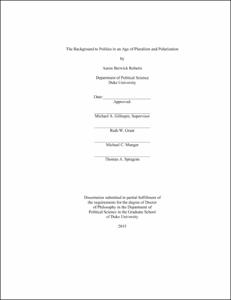 A diverse variety of liberal thinkers agree that the peace, order, stability, and well-being of government and society rest upon a fundamental bedrock of shared opinion, sentiment, sympathies, meanings, understandings, beliefs, etc. They appear largely correct in making this supposition, for the requirement is built into the very logic of liberal democratic thinking. And yet, the very plausibility of such a shared political background has come into question particularly acutely for the present generation, and, in large part, as a result of the twin forces of pluralism and polarization.

The two central questions engaged by this study are: (a) is it still conceptually plausible to presuppose such a background, and if so, (b) under what terms does it make sense; in what way should this background be understood?

This study tackles this set of questions by means of a critical analysis of select and especially prominent, representative intellectual schools of the twentieth century, for which the theme of pluralism is meaningfully central: (a) John Rawls and Jürgen Habermas (as exemplars of the political liberal project), (b) Michel Foucault and contemporary North American neo-Foucauldians (of the discourse of difference), and (c) Carl Schmitt (of the reactionary politics of meaning). The three Parts of the study are dedicated to these three schools.

The guiding hypothesis of the study is the contention that political order is always already premised upon a shared political Leitkultur (guiding cultural horizon), that is, some sort of implicitly understood cultural formation, whose structure is mis-described as being either freestandingly postmetaphysical; strictly the work of completely self-transparent, pure human reason; or a subtle vehicle for pernicious normalization. As such, pluralism and polarization is always already bounded within this guiding cultural horizon. Presupposing that the three selected schools are meaningfully representative of the intellectual, pluralist alternatives available in the early twenty-first century, the critical analysis of these three schools bears out the study's central hypothesis.