Seeing the Light: the Origin and Evolution of Plant Photoreceptors 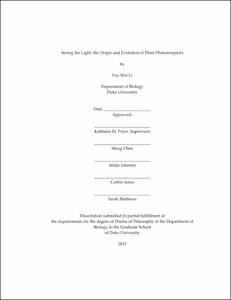 Plants use an array of photoreceptors to measure the quality, quantity, and direction of light in order to respond to ever-changing light environments. Photoreceptors not only determine how and when individual plants complete their life cycles, but they also have a profound and long-term macroevolutionary influence on species diversification. Despite their significances, very little is known about photoreceptors across plants as whole, and we lack a comprehensive view of photoreceptor evolution.

In my dissertation, I investigate the origin and evolution of three of the most prominent photoreceptor gene families in plants: phytochromes, phototropins and neochromes. Using newly available transcriptomic and genomic data, I completed the first in-depth survey of these photoreceptor families across land plants, green algae, red algae, glaucophytes, cryptophytes, haptophytes, and stramenopiles.

Phytochromes are red/far-red photoreceptors that play essential roles in seed germination, seedling photomorphogenesis, shade-avoidance, dormancy, circadian rhythm, phototropism, and flowering. Here, I show that the canonical plant phytochromes originated in a common ancestor of streptophytes (charophyte green algae plus land plants), and I identify the most likely sequence whereby the plant phytochrome structure evolved from its ancestral phytochrome. Phytochromes in charophyte algae are structurally diverse, including canonical and non-canonical forms, whereas in land plants, phytochrome structure is highly conserved. Liverworts, hornworts, and Selaginella apparently possess a single phytochrome gene copy, whereas independent gene duplications occurred within mosses, lycopods, ferns, and seed plants, leading to diverse phytochrome families in these clades. My detailed phylogeny encompasses all of green plants and enables me to not only uncover new phytochrome lineages, but also to make links to our current understanding of phytochrome function in Arabidopsis and Physcomitrella (the major model organism outside of flowering plants). Based on this robust evolutionary framework, I propose new hypotheses and discuss future directions to study phytochrome mechanisms.

Phototropins are blue-light photoreceptors that regulate key adaptive physiological responses, including shoot-positive phototropism, root-negative phototropism, chloroplast accumulation/avoidance, stomatal opening, circadian rhythm, leaf expansion, and seedling elongation I show that phototropins originated in the common ancestor of Viridiplantae (all green algae [charophytes, chlorophytes, prasinophytes] plus land plants). Phototropins repeatedly underwent independent duplications in all major plant lineages (mosses, lycopods, ferns and seed plants), except for liverworts and hornworts, where phototropin is a single-copy gene. Following each major duplication event, phototropins subsequently differentiated in parallel, resulting in two specialized (yet partially overlapping) functional forms that primarily mediate either low- or high-light responses. My gene phylogeny further suggests that phototropins have co-evolved with phytochromes, as is evident from their molecular interactions and strikingly similar gene duplication patterns. I hypothesize that the co-evolution of phototropins with phytochromes, together with their subsequent convergent functional divergences in phototropic responses, contributed to the success of plants in adapting to diverse and heterogeneous habitats.

Neochromes are chimeric photoreceptors that, by fusing phytochrome and phototropin modules into a single protein, are able to use both red/far-red and blue light to modulate phototropic responses. Neochromes were first discovered in ferns, and the evolution of neochromes was implicated as a key innovation that facilitated fern diversification under the low-light angiosperm canopies. Despite its significance from an evolutionary standpoint, the origin of neochromes has remained a mystery. Here I present the first evidence for neochrome in hornworts (a bryophyte lineage) and demonstrate that ferns acquired neochrome from hornworts via horizontal gene transfer (HGT). Fern neochromes are nested within hornwort neochromes in my large-scale phylogenetic reconstructions of phototropin and phytochrome gene families. Divergence date estimates further support the HGT hypothesis, with fern and hornwort neochromes diverging 179 MYA, long after the split between the two plant lineages (at least 400 MYA). By analyzing the draft genome of the Anthoceros punctatus hornwort, I also discovered a novel phototropin gene that likely represents the ancestral lineage of the neochrome phototropin module. Thus, a neochrome originating in hornworts was horizontally transferred to ferns, where it may have played a significant role in the diversification of modern ferns.

In summary, my studies identified the molecular origins of phytochromes, phototropins and neochromes, and reconstructed their respective evolutionary histories. This new framework for photoreceptor evolution will stimulate new research linking ecology, evolution, and photochemistry to understand how plants adapt to variable light environments.