Theta Functions and the Structure of Torelli Groups in Low Genus 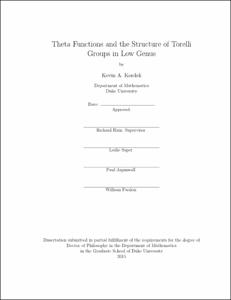 on its first integral homology. The hyperelliptic Torelli group TDg is the subgroup

of Tg whose elements commute with a fixed hyperelliptic involution. The finiteness

properties of Tg and TDg are not well-understood when g > 2. In particular, it is not

complex analytic geometry. The Torelli space T3 is the moduli space of non-singular

a model of the classifying space of T. Each component of the hyperelliptic locus T hyp 3

in T3 is a model of the classifying space for TD3. We will investigate the topology

related to the topology of T3 and T3 hyp. We show that the zero locus in h 2 x C2

of any genus 2 theta function is isomorphic to the universal cover of the universal framed genus 2 curve of compact type and that it is homotopy equivalent to an infinite bouquet of 2-spheres. We also derive a necessary and sufficient condition for the zero locus of any genus 3 even thetanull to be homotopy equivalent to a bouquet of 2-spheres and 3-spheres.