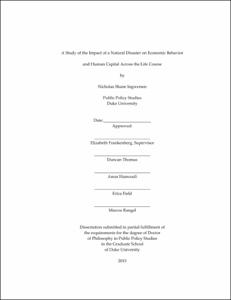 How households and individuals respond to adverse and unanticipated shocks is an important concern for both economists and policy makers. This is especially true in developing countries where poverty, weak infrastructure, and a lack of social safety nets often exacerbate the effects of adverse shocks on household welfare. My research addresses these issues in the context of three economic outcomes and behaviors - early life health and the accumulation of human capital, willingness to take on financial risk, and behavior in the labor market. The results of this research project both adds to our understanding of how life experiences shape individuals' well-being and behavior and how policy can help individuals achieve long-term improvements in the lives following adverse events.

My research focuses on households and individuals affected by a large-scale natural disaster, the 2004 Indian Ocean tsunami. I utilize data from the Study of the Tsunami Aftermath and Recovery (STAR), a unique longitudinal survey of individuals and households living in coastal communities in Aceh and North Sumatra, Indonesia, at the time of the tsunami. The STAR surveys were conducted annually for five years after the disaster and include a wide range of demographic, economic, and health measures.

In the first chapter, Child Height after a Natural Disaster, co-authored with Elizabeth Frankenberg, Duncan Thomas, and Jed Friedman, we investigate the immediate and long-run impacts on child health of in utero exposure to stress induced by the tsunami. We investigate whether in utero exposure to stress, as measured by tsunami-induced maternal posttraumatic stress, affected the growth of children born in the aftermath of the tsunami in the critical first five years of their lives. Although previous studies suggest that in utero exposure to stress is related to a number of adverse birth outcomes such as prematurity and lower birth weight, there is little evidence of the impact on linear growth, a strong correlate of later life income. We find evidence that children exposed to high levels of stress beginning in the second trimester experienced reduced growth in the first two years of their lives. We also find evidence that growth reductions largely disappear by age five. This suggests that significant catch-up growth is possible, particularly in the context of pronounced post-disaster reconstruction and economic rehabilitation.

In the second chapter, The Impact of a Natural Disaster on Observed Risk Aversion, I investigate the short and long-term impacts of the 2004 Indian Ocean tsunami on attitudes toward risk. Attitudes toward risk are important determinants of economic, demographic, and health-related behaviors, but how these attitudes evolve after an event like a natural disaster remains unclear because past research has been confounded by issues of selective exposure, mortality, and migration. My study is the first to directly address these problems by utilizing exogenous variation in exposure to a disruptive event in a sample of individuals that is representative of the population as it existed at the time of the event. In addition, intensive efforts were made to track migrants in the sample population, which is important for this study because migration is common following events like natural disasters and is likely related to attitudes toward risk. I find that physical exposure to the tsunami (e.g., seeing or hearing the tsunami or being caught up in the tsunami) causes significant short-term decreases in observed aversion to risk, especially for the poor, but few longer-term differences. This finding has important implications for the design of effective post-disaster assistance policies. In particular, it implies that post-disaster assistance programs should include aid that is consistent with the observed risk attitudes of the survivors such as job training and capital to start-up businesses.

In the last chapter, Labor Market Outcomes following the 2004 Indian Ocean Tsunami, I investigate how labor market outcomes changed in coastal communities in Aceh and North Sumatra following the tsunami and the post-disaster recovery efforts. Although restoring the livelihoods of survivors of adverse events is critical for their long-term recovery, there is little evidence from developing countries of how labor market outcomes change after such events. Using the STAR data, I find a significant and persistent increase in paid employment for younger women in urban communities. The increase occurred in communities that were heavily damaged by the tsunami and those that were not, suggesting that the impacts of the disaster on livelihoods are likely long-lasting and extend beyond the communities that were directly stuck by the disaster.