Determinants of Teenage Childbearing in the United States 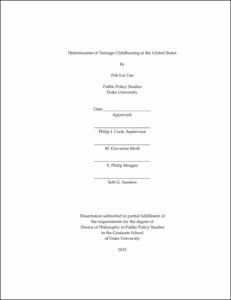 The second study examines potential causes of the decline in the U.S. teenage birth rate between 1991 and 2010. Using age-period-cohort models with Vital Statistics birth data and Census population counts, I show that the decline was driven by period changes in the early 1990s but by cohort changes between the mid-1990s and mid-2000s. I also use a difference-in-differences model to investigate the extent to which social policies in the 1970s-1980s can explain these cohort changes. The evidence suggests that while legalization of abortion for adult women and unilateral divorce laws had a significant impact on teenage birth rates in the 1990s-2000s, abortion legalization is unlikely to be a major explanation for the observed decline.