Conformational Heterogeneity of a Multifunctional Protein 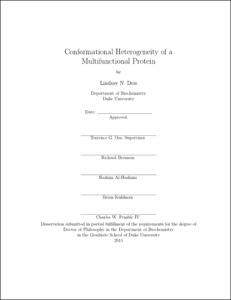 The structural plasticity conferred by conformational flexibility has increasingly been recognized as a likely determinant of function. For example, multiscale heterogeneity in the calmodulin central helix most likely helps it in binding over 100 protein targets, and a concerted motion seen in both nuclear magnetic resonance (NMR) and crystal structures of ubiquitin is proposed to underlie its functional plasticity of promiscuous binding to many different proteins with high affinity. However, flexibility is manifested in a variety of ways, depending both on the protein itself and on how it is observed. Conformational heterogeneity (the term we use for flexibility when studied by X-ray crystallography) is evident in electron density, either as fully separated peaks or as anisotropic density shapes showing fluctuation of atom groupings. Many phenomena contribute to conformational heterogeneity in crystal structures, from diverse crystal contacts to functionally relevant conformational fluctuations on a wide range of time and size scales.

In addition to ubiquitin and calmodulin, the Staphylococcus aureus virulence factor staphylococcal protein A (SpA) is an example of a highly heterogeneous protein. SpA is a major contributor to bacterial evasion of the host immune system, through high-affinity binding to host proteins such as antibodies, von Willebrand factor, and tumor necrosis factor receptor 1 (TNFR1). The protein includes five small three-helix-bundle domains (E-D-A-B-C) separated by conserved flexible linkers. Prior attempts to crystallize individual domains in the absence of a binding partner were apparently unsuccessful. There are also no previous structures of tandem domains. In this thesis, I report the high-resolution crystal structures of a single C domain (collected at both cryogenic and room temperatures), a single A domain, and two B domains connected by the conserved linker. All four apo structures exhibit extensive multiscale conformational heterogeneity, which required novel modeling protocols. Comparison of domain structures shows that helix1 orientation is especially heterogeneous, coordinated with changes in sidechain conformational networks and contacting protein interfaces.

The interaction between a SpA domain and the Fc fragment of IgG was partially elucidated previously in the crystal structure 1FC2. Although informative, the previous structure wasn't properly folded and left many substantial questions unanswered, such as a detailed description of the tertiary structure of SpA domains in complex with Fc and the structural changes that take place upon binding. In this thesis, I report the 2.3-A structure of a fully folded SpA domain in complex with Fc. My structure indicates that there are extensive structural rearrangements necessary for binding Fc, including concerted rotamer changes and coupled backbone rearrangements that lead to a difference in helix1 angle. The conformational heterogeneity of the helix1/2 interface is also eliminated in the complex, with previously poly-rotameric interfacial residues locking into single rotamer conformations. Such a loss of conformational heterogeneity upon formation of the protein-protein interface may occur in SpA and in its multiple binding partners and may be an important structural paradigm in other functionally plastic proteins.