Civilian Autonomy and Resilience in the Midst of Armed Conflict 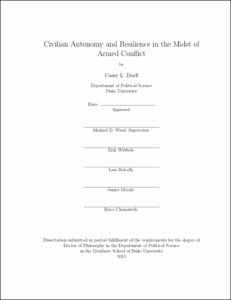 In situations of armed violence and insecurity, how do civilians influence the political environment around them? In this dissertation, I present three different studies that broadly engage this question. In concert, the papers presented herein offer new insights on civilians' relationship to armed conflict through a focus on victimization, participation, attitudes on resistance, and the effects of civilian resistance on aggregate levels of violence.

The first study explores the effects of victimization on political participation. I argue that previous answers to this question have overlooked a key variable for predicting civilian behavior: individual level social context. As a step forward in connecting social support networks to behavioral outcomes, I present the kinship network as a novel measure that captures an individual's valuable and private social interactions. I find that survivors of criminal violence with strong ties to kinship networks are most likely to attend political meetings. By highlighting variation in behavior across victims, I challenge previous work which only examines differences in participation between victims and non-victims.

Motivated by the assumption that attitudes are a precursor to action, my second study examines civilian attitudes on the efficacy of resistance in regions of protracted violence. Using an original survey fielded in Mexico, I explore the conditions under which civilians are likely to view nonviolent or violent methods as useful tools for change. I first test whether several demographic factors--age, gender, income, knowledge about civil resistance, and media consumption--influence attitudes toward resistance. Moving beyond these variables, I then test whether perceptions about government responsibility affect these attitudes. Specifically, I argue that civilian attitudes towards resistance methods are informed by which political actor civilians view as responsible for their security problems. I find that the predicted probability of viewing nonviolent action as more effective than violent action increases by 20.8% for those who attribute security responsibility to local authorities, compared to other actors. Using an embedded survey experiment, I then address the empirically relevant question of whether these attitudes about resistance correlate with action. I find that compared to those who do not view resistance as useful, respondents who view nonviolence as effective are "supportive types'' who are more willing than others to support local resistance groups, regardless of the methods these groups employ. Together, these analyses provide important information for civilian organizers seeking to mobilize latent support for resistance. Moreover, they enrich our understanding of the ways in which communities can reduce violence in order to reclaim political control during armed conflicts.

Last, I present an aggregated analysis on the evolution of armed conflict in Mexico. The criminal war in Mexico is extremely complex: Drug Trafficking Organizations, citizens, government agents, amongst others, are all relevant actors within the dynamic evolution of the conflict. Existing research, however, typically ignores the interdependencies inherent to these networks. Using a new collection of machine-coded event data, I generate conflict networks for each year from 2004 to 2010. In doing so, I make three major contributions. First, I offer insights into the potential promise and pitfalls of using machine-coded data for country-level analysis. Next, after cleaning and improving upon the original data, I generate yearly networks, which capture a wide range of violent-related actors. Importantly, I demonstrate how these networks illustrate the interdependent nature of the Mexican conflict and present new insights, such as how government coordination changes in response to cartel violence over time. Finally, I use a latent space approach to identify previously unobservable violence between government actors, criminal groups, and civilians. This research design serves as a platform for future research to investigate the effects of major civilian-led events--such as mass protests--on the evolution of armed conflict.