Characterizing the Molecular Switch from Proteasomes to Autophagy in Aggresome Processing 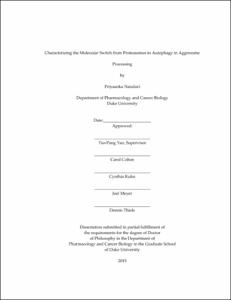 Cells thrive on sustaining order and balance to maintain proper homeostatic functions. However, the primary machinery involved in protein quality control including chaperones, ubiquitin proteasome system, and autophagy all decline in function and expression with age. Failures in protein quality control lead to enhanced protein misfolding and aggregation. Efficient elimination of misfolded proteins by the proteasome system is critical for cellular proteostasis. However, inadequate proteasome capacity can lead to aberrant aggregation of misfolded proteins and inclusion body formation, which is a hallmark of numerous neurodegenerative diseases. Due to the post-mitotic nature of neurons, they are more susceptible to the collapse in proteostasis correlated with age.

Here, we propose a cell based model of aggresome clearance using a reversible proteasome inhibitor, MG132, to identify the precise molecular machinery involved in proper processing of inclusions. It is known that once misfolded proteins are aggregated, the proteasome system can no longer degrade them. Furthermore, the continuous accumulation of aggregates often leads to aggresome formation, which results in amalgamated inclusion bodies that are simply too large for autophagosomes to engulf and degrade. Although, studies have shown that aggresomes can eventually be cleared by autophagy, the molecular mechanisms underlying this process remain unclear.