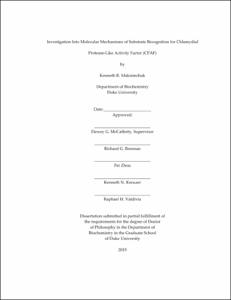 The obligate intracellular pathogen, Chlamydia trachomatis, is becoming an ever greater public health threat worldwide. Despite aggressive public health awareness campaigns and treatment with antibiotics, chlamydial infections continue to be the most frequently reported sexually transmitted infection in the United States and the cause of 3% of worldwide blindness. While research into understanding various mechanisms of chlamydial pathogenesis is ongoing, efforts to identify critical protein targets are hampered by the lack of facile genetic manipulation systems available for Chlamydia. Without the ability to perform genetic studies, researchers have employed chemical biology tools to close the gap in understanding how Chlamydia survives and thrives in the host cell.

Chlamydial protease-like activity factor (CPAF) has been identified as a central virulence factor in chlamydial pathogenesis. Several studies have indicated a role for CPAF-mediated degradation of host proteins in the late stages of infection. CPAF is hypothesized to interfere with myriad host cell processes, including inflammation, cell proliferation, cytoskeletal development, and immunity presentation. However, recent studies have called into question the methods used to previously identify bona fide in vivo CPAF targets, as CPAF has been shown to retain proteolytic activity even in the presence of broad spectrum protease inhibitors. As a result of these new finding, there is a renewed call to carefully identify CPAF substrates using methods that ensure total inhibition of post-lysis proteolysis.

This dissertation aims to clarify the role of CPAF in chlamydial pathogenesis and to identify mechanisms by which CPAF exhibits substrate specificity. Because enzymes can manifest specificity through kinetic mechanisms, sequence recognition, secondary site substrate binding, or protein structure level specificity, multiple methods of biochemical characterization were employed to distinguish between these modes of specificity.