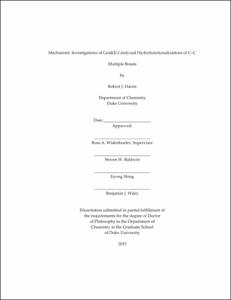 Cationic gold(I) complexes containing phosphine and N-heterocyclic carbene based ligands are a powerful catalysts for the hydrofunctionalization of C-C multiple bonds with carbon and heteroatom based nucleophiles as well as the cycloisomerization of enynes and related &#960;-systems. Mechanisms involving outer sphere, nucleophilic attack an activated gold &#960;-complex are typically invoked for both hydrofunctionalizations and cycloisomerizations, however, direct experimental evidence for these mechanisms remain limited.

Gold(I) catalyzed allene racemization is an important background reaction in the hydrofunctionalization of 1,3 disubstituted allenes. It can compromise chirality transfer or be exploited to realized stereoconvergent synthesis of allylic alcohols and amines. The kinetics of the racemization of aromatic 1,3-disubstituted allenes catalyzed by gold(I) phosphine complexes has been investigated. The rate of racemization displayed first order dependence on allene and gold concentration. Kinetic analysis gold(I) catalyzed racemization of allenes as a function of allene and phosphine donor ability established a depletion of electron density on the terminal allene carbons and an accumulation of electron density on the phosphine ligand in the rate-limiting transition state.

Investigation of the mechanism of gold(I) catalyzed hydrofunctionalization of allenes with alcohols, carbamates, and anilines established a variable catalyst resting state depending on the equilibrium binding affinities of the nucleophile and the relative concentrations of allene and nucleophile that are employed. Reversible C-X bond formation may explain the difference in regioselectivity observed for hydroalkoxylation and hydroamination with carbamates. Additionally, in situ analysis of the hydrofunctionalization of enatiopure 1,3-disubstituted allenes for enatiopurity of the allene and product ruled out trapping of an achiral &#951;1-intermediate and established concomitant allene racemization as the cause of loss of enatiopurity.

Finally we report the two gold(I) carbene complexes not stabilized by &#960;-conjugated heteroatoms. First, we report the hydride abstraction from a neutral gold cycloheptatrienyl complex that was isolated and characterized in solution and by single crystal X-ray diffraction. This complex represents the first example of a gold carbenoid complex that lacks conjugated heteroatom stabilization. Second we report the synthesis of the first gold(I) vinylidene via hydride abstraction from a gold (disilyl)ethylacetylide complex to form a cationic &#946;,&#946;-disilacyclopentyl vinylidene complex. The C1 and C2 carbon atoms of the vinylidene complex underwent facile interconversion presumably through the gold &#960;-disilacyclohexyne.