The Einstein-Klein-Gordon Equations, Wave Dark Matter, and the Tully-Fisher Relation 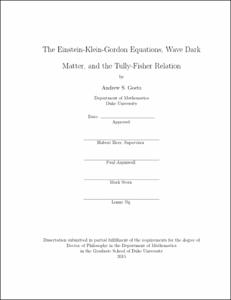 We examine the Einstein equation coupled to the Klein-Gordon equation for a complex-valued scalar field. These two equations together are known as the Einstein-Klein-Gordon system. In the low-field, non-relativistic limit, the Einstein-Klein-Gordon system reduces to the Poisson-Schrödinger system. We describe the simplest solutions of these systems in spherical symmetry, the spherically symmetric static states, and some scaling properties they obey. We also describe some approximate analytic solutions for these states.

The EKG system underlies a theory of wave dark matter, also known as scalar field dark matter (SFDM), boson star dark matter, and Bose-Einstein condensate (BEC) dark matter. We discuss a possible connection between the theory of wave dark matter and the baryonic Tully-Fisher relation, which is a scaling relation observed to hold for disk galaxies in the universe across many decades in mass. We show how fixing boundary conditions at the edge of the spherically symmetric static states implies Tully-Fisher-like relations for the states. We also catalog other ``scaling conditions'' one can impose on the static states and show that they do not lead to Tully-Fisher-like relations--barring one exception which is already known and which has nothing to do with the specifics of wave dark matter.