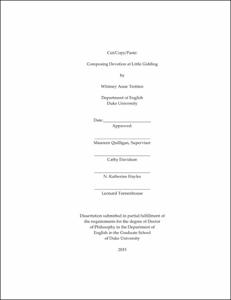 At the community of Little Gidding from the late 1620s through the 1640s, in a special room known as the Concordance Chamber, Mary Ferrar, Anna Collett, and their sisters sliced apart printed Bibles and engravings, then pasted them back together into elaborate collages of text and image that harmonize the four gospels into a single narrative. They then bound these books between elaborate covers using a method taught to them by a bookbinder's daughter from Cambridge. The resulting volumes were so meticulously designed that one family member described the process as "a new kind of printing." Collectively, these books are known as the Little Gidding Harmonies, and they are the subject of Cut/Copy/Paste.

By close-reading the Little Gidding Harmonies, Cut/Copy/Paste illuminates a unique Caroline devotional aesthetic in which poets, designers, and printmakers collaboratively explored the capacity of the codex to harmonize sectarianism. Proceeding chronologically, I begin in the Elizabethan and early Stuart periods, when women writers like Isabella Whitney, Mary Sidney Herbert, and a range of anonymous needleworkers laid the groundwork for the Harmonies' cut-up aesthetic by marrying the language of text-making to textile labor (Chapter 1). Situating women's authorship in the context of needlework restores an appreciation for the significance and centrality of ideologically gendered skills to the process of authoring the Harmonies. Building on this chapter's argument, I turn next to the earliest Harmony to show how the Ferrar and Collett women of Little Gidding, in conversation with their friend George Herbert, used cutting and pasting as a way of bypassing the stigma of print without giving up the validation that publication, as in making public, brings. This early volume attracted the attention of the court, and Little Gidding soon found itself patronized by King Charles, Archbishop Laud, and an elite coterie who saw in the women's cut-and-paste "handiwork" a mechanism for organizing religious dissention (Chapter 2). In response, Little Gidding developed ever more elaborate collages of text and image, transforming their writing practice into a full-fledged devotional aesthetic. This aesthetic came to define the poetry of an under-appreciated network of affiliated writers, from Frances Quarles and Edward Benlowes to Royalist expatriate John Quarles, Mary Ferrar at Little Gidding, and her close friend Richard Crashaw (Chapter 3). It fell out of favor in the eighteenth century, derided by Alexander Pope and others as derivative and populist; yet annotations and objects left in one Little Gidding Harmony during the nineteenth century witness how women, still denied full access to publishing in print, continued to engage with scissors and paste as tools of a proto-feminist editorial practice (Chapter 4). The second half of the last chapter and a digital supplement turn to the Harmonies today to argue for a reorientation of digital humanities, electronic editing, and "new media" studies around deeper histories of materialist or technical tropes of innovation, histories that do not always begin and end with the perpetual avant-gardism of modernity.

This project participates in what has been called the "material turn" in the humanities. As libraries digitize their collections, the material specificity of textual objects - the inlays, paste-downs, typesetting, and typography occluded by print editions - becomes newly visible through high-resolution facsimiles. Cut/Copy/Paste seizes this moment of mass remediation as an opportunity to rethink the categories, concepts, and relationships that define and delimit Renaissance literature. By reading early modern cultural production materially, I reveal the richness of the long-neglected Caroline period as a time of literary experimentation, when communities like Little Gidding and their affiliates developed a multimedia, multimodal aesthetic of devotion. Yet, even as this project mines electronic collections to situate canonical texts within a wider field of media objects and material writing practices, it also acknowledges that digital media obscure as much as they elucidate, flattening three-dimensional book objects to fit the space of the screen. In my close readings and digital supplement, I always return to the polyphonic dance of folds and openings in the Harmonies - to the page as a palimpsest, thickly layered with paper, ink, glue, annotations, and evidence of later readers' interactions with it. By attending to the emergent materiality of the Harmonies over the longue durée, Cut/Copy/Paste both deepens our knowledge of seventeenth-century devotional literature and widens the narrow lens of periodization to consider the role of Little Gidding's cut-up method in past, present, and future media ecologies.