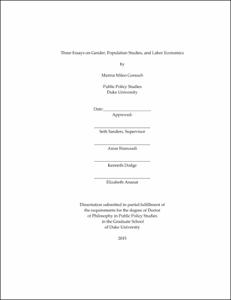 In this dissertation, I examine three questions on gender and labor economics. The first two questions are inspired by a broad literature in social psychology which has established that respondents react negatively when women engage in traditionally masculine actions in the workplace (Heilman and Chen 2005; Heilman, Wallen, Fuchs, and Tamkins 2004; Rudman and Glick 1999; Rudman 1998; Rudman and Glick 2001; Bowles, Babcock, and Lai 2006; Amanatullah and Morris 2010). This negative reaction is described as a "backlash effect" (Bowles, Babcock, and Lai 2006).

The third question examines the time men spent on childcare during the recession of 2007-2009. The recession provides a sudden change in the employment opportunities of men relative to women in the United States. Using the American Time Use Survey and the linked Current Population Survey, I show that this lopsided shock to employment opportunities was accompanied by an increase in the average amount of time men spent on childcare. In particular, men's average time on physical care for children increased during the recession; this is an element of childcare that men perform less than women. I decompose the total change in average time on childcare into behavioral, compositional, and between group change. A behavioral change among employed men accounted for the majority of the total increase in the average time spent on childcare; among men who are out of the labor force, the increase is entirely due to compositional changes.