Pearl, An Opera in Two Acts 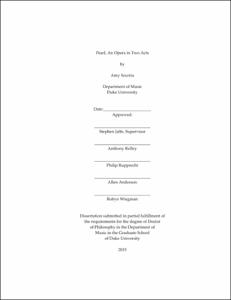 As Catherine Clément argues in her 1979 publication "L'Opéra ou la Défaite des Femmes" most female operatic characters befall a tragic ending: death, suicide, madness, murder. Building on Clément and observations of more recent feminist scholars (Carol Gilligan, Susan McClary, Marcia Citron), and on the compositional work of Paula Kimper and others, the current project strives to problematize opera's dominant paradigm, and to use my artistic work as a composer to present a different one. With a dearth of stories that highlight the relationship between a mother and a daughter, I have sought to create an artistic work with strong female leads featuring women whose lives carry on and, even, thrive. It was a propitious opportunity to have been approached by conductor Sara Jobin and feminist theorist and author Carol Gilligan (under the auspices of A Different Voice Opera Project) to develop such an opera based upon Nathaniel Hawthorne's "The Scarlet Letter". What better way to break free from a paradigm than to do so with a popular and well-loved novel? The present artistic foray seeks thus to depart from an accepted paradigm while remaining within the bounds of something fundamentally familiar and popular. In a separately available essay "Gender and Music: A Survey of Critical Study, 1988-2012", I explored a wide survey of scholarship on gender.

The feminist reinterpretation of "The Scarlet Letter" was first developed into a play, "The Scarlet Letter", work-shopped and staged at Shakespeare & Company in Lenox, MA, the Culture Project in New York City, the National Players, and the Primary Stage Theatre. It was ripe for development into a libretto for operatic presentation by a Different Voice Opera Project. As the selected composer, I began a long collaboration with Sara Jobin, Carol Gilligan, and poet Jonathan Gilligan (co-author of the libretto). Pearl, the opera, was presented in workshop versions by A Different Voice Opera Project at Shakespeare and Company in Lenox, MA during the summers of 2012 and 2013. Subsequently, our collaborative efforts were expanded through the addition of Sandra Bernhard, a dramaturg and director for a community outreach program at the Houston Grand Opera. Through conversations with Sandra, the opera became more streamlined and I was able to give it a smoother dramatic flow. In particular, Sandra's advice informed much of the opera in terms of increasing the presence of the chorus to provide the medium through which Pearl understands her past. Musically, the chorus also becomes the third part of what I call "Dimmesdale's triangle of pressure" in which he is caught within a patriarchy and pulled by three separate forces: his love and family (Hester and Pearl), his responsibility as a minister (the townspeople represented by the Chorus), and a father figure and mentor (Reverend Wilson). The present work, extensively revised during 2013-2015, grew out of these experiences.

In Hawthorne's "The Scarlet Letter", Pearl is a seven-year-old girl, born from the love affair of Hester Prynne and minister, Arthur Dimmesdale. The pregnancy of Hester immediately places her upon dangerous footing with her only preservation being silence. She is required to permanently wear a scarlet A upon her chest, whereas the minister, Dimmesdale, hides his identity as the father of the child both for himself and for the protection of his lover and child, also through silence. In the times of Puritan New England during the 17th century, a crime such as adultery (a term that is never mentioned in Hawthorne's novel) would have been punishable by death. Needless to say, the ability of Pearl and others to speak the truth within this story becomes much too perilous for the characters to voice. The silence surrounding the life of this little girl is the focus behind the development of our main character for the opera: Pearl as a grown adult, thus making this opera a sequel, of sorts, to "The Scarlet Letter". As quoted in Gilligan's 2003 publication, "The Birth of Pleasure": "At turning points in psychic life and also in cultural history - and I believe we are at one now - it is possible to hear with particular clarity the tension between a first-person voice, an "I" who speaks from human emotional experience, and a voice that overrides what we know and feel and experience, that tells us what we should see and feel know."

Pearl as a grown woman, reflects back upon her life as a child where she is both the main character and the narrator of the story, often breaking the fourth wall. In this sense, this opera is reminiscent of the term "memory play"; a term coined by Tennessee about his work, "The Glass Menagerie". In the opening of his play, Tom, the main character, begins with:

The play is memory. Being a memory play, it is dimly lighted, it is sentimental, it is not realistic. In memory everything seems to happen to music. That explains the fiddle in the wings. I am the narrator of the play, and also a character in it.

With the creation of Pearl, a new character, the opera is able to integrate the relationships that do not exist within Hawthorne's novel, providing the libretto fertile material through which to explore Carol Gilligan's psychological theories . (See page vi, Note 2). We now see the story through the lens of Pearl as she remembers her childhood with highlights upon her relationships with her mother (Hester Prynne), her father (Arthur Dimmesdale), her mother's husband (Roger Chillingworth, née Roger Prynne), the townspeople, her father's mentor, Reverend Wilson, and herself as a child, allowing for the creation of duets, trios, and ensembles to highlight these relationships. The most notable of these relationships is the one between Adult Pearl and her child self, Child Pearl. In this way, and reminiscent of Williams' "memory play", Pearl's memories and current life can now be juxtaposed, together in time, memorialized through the music that binds these events and memories together.

In life we can experience our past through memory. In film we can be provided with visual flashbacks to offer a retrospective. However, it is only within music where the relationship between two eras of self can be juxtaposed. Thus, the gambit of my opera is to find musical means where the audience may now experience the character of Pearl as a child, as an adult, and as both child and adult in duet, as an echo, as a memory, a reflection. This phenomenon is most effectively evoked within opera or musical theatre. While a libretto must fundamentally be created using fewer words than say a novel or a play - it takes longer to sing a line than it would to speak it - it falls to music to express that which cannot be extrapolated through words alone. This dilemma creates a most wonderful opportunity for music to soar with tension and emotion. It is the music that can bridge together certain characters and scenes through the creation of themes that represent (in the case of this opera) truth/honesty, a patriarchy, and love, among other themes as well as the representation of particular characters. The necessity for the score to embellish the drama through music's tools: melody, harmony, motivic development and orchestration, essentially enables the audience to draw closer to the story and the characters by means that only music can provide.

In creating Pearl, it was my hope to birth the first of many such operas that shift one operatic paradigm on its head. To create an opera where the main characters are women and where they both have independent voices and thrive. As I have written elsewhere: "Some, throughout history, have argued that music has been exhausted. That everything that can be said, particularly within the Western language of tonality, has already been said. However, I must wonder, did any of the authors of such statements consider that the female voice has yet to really sing? For, we are just beginning. And I cannot wait to hear what `she' has to say."