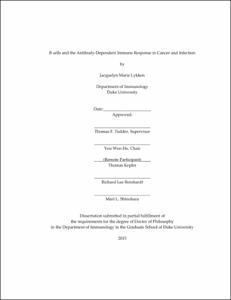 B cells and humoral immunity are critical components of an effective immune response. However, B cells are also a significant driver of a variety of autoimmune diseases and can also become malignant. Antibody-mediated B cell depletion is now regularly used in the clinic to treat both B cell-derived cancers and B-cell driven autoimmunity, and while depletion itself is effective in some patients, removal of B cells is not often curative for patients and may present additional, unforeseen risks. The overall goal of this dissertation was therefore to determine the impact of B cell depletion on T cell homeostasis and function during infection and to elucidate the genetic factors that determine the effectiveness of antibody-mediated therapy.

In Chapter 3 of this dissertation, the role of B cells in promoting T cell homeostasis was investigated by depleting mature B cells using CD20 monoclonal antibody (mAb). Acute B cell depletion in adult mice significantly reduced spleen and lymph node T cell numbers, including naïve, activated, and cytokine-producing cells, as well as Foxp3+ regulatory T cells, whereas chronic B cell depletion in aged mice resulted in a profound decrease in activated and cytokine&#61485;producing T cell numbers. To determine the significance of this finding, B cell-depleted adult mice were infected with acute lymphocytic choriomeningitis virus (LCMV). Despite their expansion, activated and cytokine-producing T cell numbers were still significantly reduced one week later. Moreover, viral peptide-specific T cell numbers and effector cell development were significantly reduced in mice lacking B cells, while LCMV titers were dramatically increased. Thus, B cells are required for optimal T cell homeostasis, activation, and effector development in vivo, particularly during acute viral infection.

In Chapter 5 of this dissertation, the distinct germline components that control the efficacy of host CD20 mAb-dependent B cell and lymphoma depletion were evaluated using genetically distinct lab mouse strains. Variations in B cell depletion by CD20 mAb among several lab mouse strains were observed, where 129 mice had significantly impaired mAb-dependent depletion of endogenous B cells and primary lymphomas relative to B6 mice. An unbiased forward genetic screen of mice revealed that a 1.5 Mbp region of Chromosome 12 that contains mycn significantly altered CD20 mAb-dependent lymphoma depletion. Elevated mycn expression enhanced mAb-dependent B cell depletion and lymphoma phagocytosis and correlated with higher macrophage numbers. Thus, host genetic variations in mycn expression in macrophages alter the outcome of Ab-dependent depletion of endogenous and malignant cells.

These studies collectively demonstrate that B cells are required for effective cellular immune responses during infection and identified factors that alter the effectiveness of mAb-dependent B cell depletion. This research also established and validated an unbiased forward genetics approach to identify the totality of host and tumor-intrinsic factors that influence mAb therapy in vivo. The findings of these studies ultimately urge careful consideration in the clinical application of B cell depletion therapies.