Suicidal Romanticism: Race, Gender, and the End(s) of Individualism 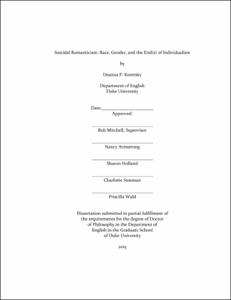 Moving beyond traditional conceptions of suicide in Romantic literature as indices of Romanticism's fascination with tragic or mad genius, this dissertation traces how Romantic-era writers also employed the trope of suicide as a political tool to argue for the rationality of individuals without rights, or with limited rights, such as slaves, women, and the poor. In both scholarly and post-Romantic artistic engagements with so-called Romantic suicide, suicide is typically interpreted as neither a critique of an unlivable society, nor even a mark of mental illness, but instead operates as a meta-critique of art itself, suggesting that the artist, by virtue of his creativity, is somehow beyond this world. But by showing how suicide also emerged, in the Romantic period, as a metaphor for challenging social structures associated with liberal individualism, Suicidal Romanticism posits that the emphasis on the link between creative and suicidal proclivities associated with Romanticism, which persists even in our contemporary imagination in spite of social scientific arguments to the contrary, troubles our capacity to talk either about the problem of mental illness or about the social injustices that would drive somebody to want not to live. The Romantic writers examined here--including Thomas Day and John Bicknell, Mary and Percy Shelley, and William Wordsworth--proposed an alternative conception of suicide, positing the need to open the social field to recognize all those who are considered "non-subjects." By using suicide as a metaphor to interrogate the roots of inequality within a social structure based on exclusive individualism, these writers suggest that acts of suicide represent responses not only to private phenomena, but also to social conditions, and that the two are not mutually exclusive. By thus reading Romantic-era discourses of suicide as radical interrogations of liberalism, Suicidal Romanticism also positions Romanticism itself as a response to political questions that first emerged in abolitionist and women's rights discourses of the long eighteenth century.