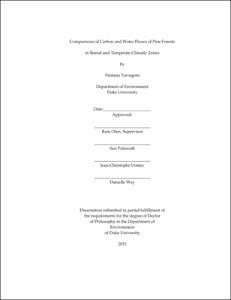 Quantifying carbon fluxes and pools of forest ecosystems is an active research area in global climate study, particularly in the currently and projected increasing atmospheric carbon dioxide concentration environment. Forest carbon dynamics are closely linked to the water cycle through plant stomata which are regulated by environmental conditions associated with atmospheric and soil humidity, air temperature and light. Thus, it is imperative to study both carbon and water fluxes of a forest ecosystem to be able to assess the impact of environmental changes, including those resulting from climate change, on global carbon and hydrologic cycles. However, challenges hampering such global study lie in the spatial heterogeneity of and the temporal variability of fluxes in forests around the globe. Moreover, continuous, long-term monitoring and measurements of fluxes are not feasible at global forest scale. Therefore, the need to quantify carbon and water fluxes and to identify key variables controlling them at multiple stands and time scales is growing. Such analyses will benefit the upscaling of stand-level observations to large- or global-scale modelling approaches.

I performed a series of studies investigating carbon and water fluxes in pine forests of various site characteristics, conditions and latitudinal locations. The common techniques used in these studies largely involved sap flux sensors to measure tree-level water flow which is scaled up to stand-level transpiration and a process-based model which calculates canopy light absorption and carbon assimilation constrained by the sap-flux beased canopy stomatal conductance (called Canopy Conductance Constrained Carbon Assimilation or 4C-A model). I collected and analyzed sap flux data from pine forests of two major species: Pinus taeda in temperate (36 °N) and Pinus sylvestris in boreal (64 °N) climatic zones. These forests were of different stage-related canopy leaf area and some were under treatments for elevated atmospheric CO2 concentration or fertilization.

I found that (Chapter 2) the 17-year long free-air CO2 enrichment (FACE) had little effect on canopy transpiration of a mixed forest with the dominant P. taeda and other broadleaved species as the understory in North Carolina, USA (Duke FACE). The result was due to the compensation of elevated [CO2]-induced increase of canopy leaf area for the reduction of mean canopy stomatal conductance. My next theoretical study (Chapter 3), comparing P. taeda (native at 36 °N in North Carolina), P. sylvestris (native at 64 °N in norther Sweden) and Pinus contorta (native at 58 °N in British Columbia, Canada) canopies, revealed that the interaction between crown architecture and solar elevation associated with site latitude of pine canopies affected the distribution and total amount of canopy light absorption and potentially photosynthesis such that the latitudinally prescribed needle organization of a pine canopy is optimal for light interception and survival in its native location. Then, I quantified and analyzed water fluxes in four pine forests: one composed of P. taeda in North Carolina and three containing P. sylvestris in northern Sweden (Chapter 4). The latter forests consisted of various stage-related canopy leaf area and nutrient status. Combining my estimates with other published results from forests of various types and latitudinal locations, I derived an approach to estimate daily canopy transpiration during the growing season based on a few environmental variables including atmospheric and soil humidity and canopy leaf area. Moreover, based on a water budget analysis, I discovered that the intra-annual variation of precipitation in a forest has a small effect on evapotranspiration and primarily affecting outflow; however, variation of precipitation across latitudes proportionally influences anuual evapotranspiration and outflow. Furthermore, the hydrologic analyses implied the `disequilibrium' of forest water cycling during the growing season when forests may use less and more water in dry and wet regions, respectively, than the incoming precipitation. Nevertherless, at annual timescale, most forests became in `equilibrium' by using similar proportion of incoming precipitation. Finally, (Chapter 5) I estimated and analyzed the temporal and spatial variabilities of carbon fluxes of the same four forests measured in Chapter 4 using the 4C-A computational approach and analyzed their resource-use efficiencies. I concluded that, based on my results and others as available, despite the differences in species clumping and latitudes which influence growing season length and solar elevation, the gross primary productivity can be conservatively linearly related to the canopy light absorption. However, based on previous findings from a global study, different allocation of the acquired carbon to the above- and belowground is regulated by soil nutrient status.

Overall, the findings in this dissertation offer new insights into the impacts of environmental changes on carbon and water dynamics in forests across multiple sites and temporal scales which will be useful for larger-scale analyses such as those pertaining to global climate projection.