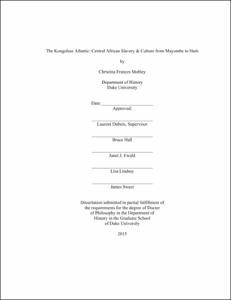 In my dissertation, "The Kongolese Atlantic: Central African Slavery & Culture from Mayombe to Haiti," I investigate the cultural history of West Central African slavery at the height of the trans-Atlantic slave trade, the late eighteenth century. My research focuses on the Loango Coast, a region that has received little scholarly attention despite the fact that it was responsible for roughly half of slave exports from West Central Africa at the time. The goal of my dissertation is to understand how enslaved Kongolese men and women used cultural practices to mediate the experience of slavery on both sides of the Atlantic world. To do so, I follow captives from their point of origin in West Central Africa to the Loango Coast and finally to the French colony of Saint Domingue in order to examine these areas as part of a larger "Kongolese Atlantic" world.

My dissertation begins by exploring the social and political history of the slave trade in the Loango Coast kingdoms, charting the structural changes that took place as a result of Atlantic trade. Next, I use historical linguistics to investigate the origins of captives sold on the Loango Coast. I find that the majority of captives came broadly from the Kongo zone, specifically from the Mayombe rainforest and Loango Coast kingdoms north of the River Congo. I then use a sociolinguistic methodology to reconstruct the cultural history of those groups in the near-absence of written documents. In the last chapter of the dissertation, I follow enslaved Central Africans from the Loango Coast to Saint Domingue, examining how they used specific and identifiable north coast cultural practices in the context of slavery. I find enslaved Central Africans used north coast spiritual tools such as divination, possession, trance, and power objects to address the material problems of plantation life. Finally, I argue the persistence of these spiritual practices demonstrates a remarkable durability of Kongolese ontology on both sides of the Kongolese Atlantic world.

My research produces new information about the history of the Loango Coast as well as the colony of Saint Domingue. The north coast origin of captives which I establish using historical linguistics contradicts earlier arguments that slaves traded on the Loango Coast originated from Kingdom of Kongo or from the inland Malebo Pool or Upper River Congo trade. I show inhabitants of the coastal kingdoms and Mayombe rainforest were not mere middlemen in the interior slave trade as previously thought, but were the victims of new mechanisms of enslavement created as a result of the erosion of traditional political institutions due to the trans-Atlantic slave trade. The north coast origin of Loango Coast captives has repercussions for the cultural history of the Americas. It means that captives were not "Atlantic Creoles" with prior knowledge of European culture and religion. I argue historians can only understand the meaning of the cultural practices of Africans in the Americas by understanding where Africans came from and what cultural and linguistic tools they brought with them. The use and transmission of Kongolese ritual knowledge and spiritual technologies in Saint Domingue challenges historians of slavery to move beyond the false dichotomy that culture originated in either Africa or on the plantation and forces a fundamental reassessment of the concept of creolization.