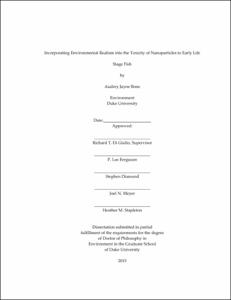 As the production and use of nanoparticles (NPs) has increased, so has concern over their effects on the environment and aquatic organisms. While the majority of research on the toxicity of NPs has been performed using controlled laboratory conditions, little is known about their effects in more complex environments. The goal of this dissertation is to understand how incorporating increasing levels of environmental complexity affects the study of NP toxicity to early life stage fish. In particular, goals included evaluating the impact of increasing environmental complexity on silver NP (AgNP) toxicity to young Atlantic killifish and zebrafish and exploring how photocatalytic degradation of benzo(a)pyrene (BaP) by TiO2 NPs affected toxicity to young zebrafish.

In order to incorporate high environmental complexity into AgNP toxicity studies, a range of experimental systems were used. First, mesocosms built to simulate freshwater North Carolina wetlands were dosed with gum Arabic-coated AgNPs (GA-AgNPs), polyvinylpyrollidone-coated AgNPs (PVP AgNPs) and AgNO3 as the most ecologically relevant scenario. Mortality induced by samples taken from these mesocosms to embryonic and larval Atlantic killifish was compared to mortality induced by of samples prepared in the laboratory. For embryonic killifish, samples taken from the mesocosms caused significantly less mortality than samples prepared in the laboratory for all types of silver. However, for larval killifish, toxicity of GA-AgNPs from mesocosms was not lower than toxicity of those from the laboratory and toxicity of PVP-AgNPs was actually higher in mesocosm samples. Mortality caused by AgNO3 was significantly less in samples from the mesocosms than from the laboratory, similar to results found in embryos. For larvae, both types of NPs from the mesocosms were more toxic than AgNO3.

In order to understand the difference in results seen between mesocosm samples and laboratory samples, a microcosm approach was used to assess the individual contributions of plants, soil, and natural water to the mediation of AgNP toxicity. In addition, samples were thoroughly characterized in order to understand how these factors were influencing. Silver speciation was assessed using x-ray absorption near edge structures spectroscopy, extent of AgNP aggregation and dissolution using flow field flow fractionation coupled with inductively coupled plasma mass spectrometry (FFFF-ICP-MS), and total silver and dissolved silver quantified using ICP-MS. Organic matter quantity and quality were also measured using total organic carbon (TOC) analysis and fluorescence excitation-emission spectroscopy (EEMS). Ultimately, although plant-derived organic matter was shown to significantly influence silver speciation and AgNP aggregation, these experiments were not able to replicate the interesting results seen with killifish larvae from the mesocosms on a smaller scale. In experiments using zebrafish embryos, the presence of plants was correlated with reduced toxicity. However, this correlation could not be attributed to any of the changes seen in AgNP or silver characteristics due to reduced water column concentrations of silver that also occurred when plants were present.

Due to the differences seen in mesocosm and microcosm results, I hypothesized that ultraviolet (UV) light could be playing a role in mediating AgNP toxicity. AgNPs and AgNO3 were illuminated using a solar simulator prior to dosing zebrafish embryos. UV light was found to decrease GA-AgNP and AgNO3 toxicity and to increase PVP-AgNP toxicity. Ultraviolet-visible light (UV-vis) spectra of AgNPs and AgNO3 after exposure to UV light indicated changes in size distribution and aggregation. These changes could be due to photolysis of coatings leading to increased dissolution of silver and destabilization of the NPs.

I also explored the effect of TiO2 NP facilitated photocatalytic degradation of toxicity of BaP. Due to the unique photocatalytic properties of TiO2 NPs, they are not only being proposed for use as a remediation aid for recalcitrant organic contaminants but also possess the ability to transform organic co-contaminants in the environment and change their toxicity and risk to aquatic organisms. BaP was degraded with TiO2 using a solar simulator before dosing young zebrafish. Degradation resulted in increased cytochrome P450 (CYP) activity, a marker of polycyclic aromatic hydrocarbon (PAH) exposure and toxicity as well as increased mortality. However, these effects ultimately proved to be dependent on the presence of DMSO, a carrier solvent for BaP, and thus their environmental relevance is questionable.

Taking environmental complexity into account is an important part of understanding engineered NP risk. I found that AgNP toxicity is highly dependent on environmental matrix and individual factors such as UV, and that TiO2 NPs have the potential to influence toxicity of organic contaminants. Ultimately, ecologically appropriate and relevant risk assessment of NPs to aquatic organisms will rely on fully characterizing how the fate, behavior, and toxicity of NPs is influenced by environmental factors such as plants, sediments, bacteria, organic matter, ionic strength, and UV light.