The Nature of the Wind: Myth, Fact, and Faith in the Development of Wind Knowledge in Early Modern England 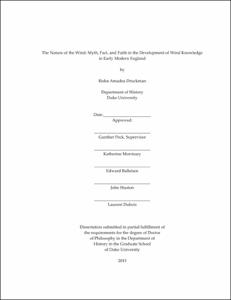 Historically, the wind has functioned in multiple capacities, both physically and symbolically. The following study explores the ways in which natural history, myth and folklore, craft knowledge, and religion contributed to a growing body of knowledge about the wind at a moment in British history when wind knowledge assumed unprecedented political and economic significance. How did people come to know the wind and to narrate and communicate wind knowledge in the seventeenth century? What work did these complex and competing narrations perform? And what do they make visible? In pursuing these lines of inquiry, my work brings together three principle bodies of knowledge: Environmental History, History of Science, and British Imperial history; and it draws upon documents that include scientific treatises, written records of oral anecdotes and weather wising, religious sermons, travel narratives, fictional novels, and imperial correspondence. I argue that because the wind and wind knowledge were ubiquitous to the emerging success and identity of the British empire, a great variety of historical actors sought to control and narrate what wind knowledge was, where it came from, and what political work it should do. These efforts were unequivocally rooted in first hand experience and observation of the wind--maker's knowledge--and created what I call an intellectual commons that enabled commoners as well as elites to shape and briefly control the contours of wind knowledge in early Modern Britain and its expanding empire.