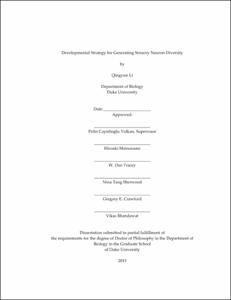 Sensory neuron diversity is a common theme in the animal kingdom. It provides the cellular infrastructure that supports the accurate perception of the external world. Among all sensory systems, the olfactory system demonstrates an extreme in the extraordinarily diversified neuronal classes it holds. The system-wide cellular diversity is in sharp contrast with the individual specialization of olfactory receptor neurons (ORNs) per se. How the nervous system, particularly the olfactory system, uses limited genetic information to generate a huge variety of neurons with distinct properties remains elusive.

The adult Drosophila olfactory system is an excellent model to address this question due to its conserved organizational principles and reduced complexity. The fly olfactory appendages contain 50 ORN classes, each of which expresses a single receptor gene from a family of ~80 genes. Stereotyped clusters of 1-4 ORN classes define about 20 sensilla subtypes, belonging to 3 major morphological types. All cellular components within a sensillum are born by a single sensory organ precursor (SOP) via asymmetric divisions. The molecular mechanisms that determine SOP differentiation potentials to develop into distinct sensilla subtypes and the associated ORN classes are unknown.

From a genetic screen, we identified two mutant alleles in the rotund (rn) gene locus, which has a critical function in diversifying ORN classes. Rn is required in a subset of SOPs to confer novel sensilla subtype differentiation potentials from otherwise default ones within each sensilla type lineage. In rn mutants, ORNs in rn-positive sensilla subtypes are converted to lineage-specific default rn-negative fates, resulting in only half of the normal ORN diversity. This work is described in Chapter 2.

Based on an unbiased time-course transcriptome analysis, we discovered two critical downstream targets of Rn, Bric-à-brac (Bab) and Bar. In light of the knowledge about leg development, we found these genes, along with Apterous (Ap) and Dachshund (Dac), are part of the conserved proximal-distal (PD) gene network that play a crucial role in patterning the antennal precursor field prior to proneural gene-mediated SOP selection. Interactions between these PD genes under the influence of morphogen gradients separate the developing antennal disc into 7 concentric domains. Each ring is represented by a unique combination of the aforementioned transcription factors, coding the differentiation potentials for a limited number of sensilla subtypes. Genetic perturbations of the network lead to predictable changes in the ratios of different sensilla subtypes and corresponding ORN classes. In addition, using CRISPR/Cas9 technology, we were able to add tags to specific rn isoforms in the endogenous locus, and show positive regulation of Bab and negative regulation of Bar by the direct binding of Rn to the promoters in vivo. This work is presented in Chapter 3.

We proposed a three-step mechanism to explain ORN diversification, starting from pre-patterning of the precursor field by PD genes, followed by SOP selection by proneural genes, and ended with Notch-mediated neurogenesis. The final outcomes are greatly determined by the pre-patterning phase, which may be modified during evolution to compensate special olfactory needs by individual species. In our model, each step serves a single purpose, which displays context-dependent functions. By changing contexts, reassembly of the same logical steps may guide neuronal diversification in parallel systems with completely different identities. This step-wise mechanism seems to be a common strategy that is used by many other systems to generate neuronal diversity.