The Bittersweet Coast: Environments of War and Aftermath in Colombia 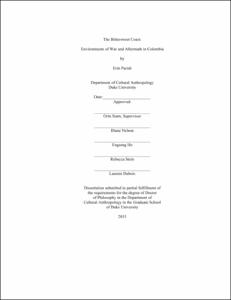 How do people rebuild their lives, livelihoods, and community in the same location where brutal conflict has occurred? My research in San Carlos, Colombia--a rural community emerging from a decade of violence--investigates how conflict targets the built and natural environments of people's lives. Roads, bridges, buildings, and land have all been sites of violence, illustrating the blurred lines between military and civilian space. The meanings of these locations change after war. Yet, for those returning after a decade of internal displacement, these are exactly the building blocks that must be used to remake home, livelihoods, and community. I use the concept of forensic infrastructure to explore the materiality of memory and politics in war, the immediate aftermath, and long-term reconstruction.

A forensic approach to infrastructure involves understanding materials as text and tools in which politics and memory are embedded and enacted. Forms of infrastructure serve as archives of the past and stages for the practice and performance of awesome and everyday life. As both material and metaphor for interdependence, infrastructure is the physical embodiment of complex concepts such as development, modernity, progress, citizenship, and stability.

Nowhere are these concepts more contested in Colombia than San Carlos. Between 1998-2005, the FARC and ELN guerrillas, the Bloque Metro and Cacique Nutibara paramilitaries, and the armed forces fought in San Carlos over control of the country's largest hydroelectric complex and the Bogotá-Medellín highway connecting Colombia's two biggest cities. Eighty percent of the population fled. Beginning in 2005, however, after paramilitary demobilization and military victories over the FARC, people started returning to their homes. Since 2010, San Carlos has been host to innovative initiatives facilitating return. It is often portrayed in the national media as a model for return, reconstruction, and reconciliation.

While internal displacement has been a crisis in Colombia for decades, large-scale return is a new phenomenon. Little has been written about return, especially based on sustained ethnographic fieldwork. This dissertation, based on seven research trips between 2008-2015, including fifteen months of fieldwork in San Carlos and Medellín in 2011-2012, sheds light on the everyday experiences and difficulties of return--both for those who were displaced and those who remained. Rebuilding the physical spaces of connection, containment, and circulation necessary for community to function in San Carlos embodies a larger struggle over the nature of development, progress, and reparation in Colombia. I suggest return is possible in San Carlos because the fight was over mobility instead of the land itself. The same model of return will be difficult to impossible to apply in areas where monoculture agriculture or mining play a major role in conflict.