Development of Cartilage-Derived Matrix Scaffolds via Crosslinking, Decellularization, and Ice-Templating 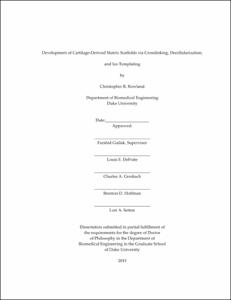 Articular cartilage is a connective tissue that lines the surfaces of diarthrodial joints; and functions to support and distribute loads as wells as facilitate smooth joint articulation. Unfortunately, cartilage possesses a limited capacity to self-repair. Once damaged, cartilage continues to degenerate until widespread cartilage loss results in the debilitating and painful disease of osteoarthritis. Current treatment options are limited to palliative interventions that seek to mitigate pain, and fail to recapitulate the native function. Cartilage tissue engineering offers a novel treatment option for the repair of focal defects as well as the complete resurfacing of osteoarthritic joints. Tissue engineering combines cells, growth factors, and biomaterials in order to synthesize new cartilage tissue that recapitulates the native structure, mechanical properties, and function of the native tissue. In this endeavor, there has been a growing interest in the use of scaffolds derived from the native extracellular matrix of cartilage. These cartilage-derived matrix (CDM) scaffolds have been show to recapitulate the native epitopes for cell-matrix interactions as well as provide entrapped growth factors; and have been shown to stimulate chondrogenic differentiation of a variety of cell types. Despite the potent chondroinductive properties of CDM scaffolds, they possess very weak mechanical properties that are several orders of magnitude lower than the native tissue. These poor mechanical properties lead to CDM scaffolds succumbing to cell-mediated contraction, which dramatically and unpredictably alters the size and shape of CDM constructs. Cell-mediated contraction not only prevents the fabrication of CDM constructs with specific, pre-determined dimensions, but also limits cellular proliferation and metabolic synthesis of cartilage proteins. This dissertation utilized collagen crosslinking techniques as well as ice-templating in order to enhance the mechanical properties of CDM scaffolds and prevent cell-mediated contraction. Furthermore, the decellularization of CDM was investigated in order to remove possible sources of immunogenicity. This work found that both physical and chemical crosslinking techniques were capable of preventing cell-mediated contraction in CDM scaffolds; however, the crosslinking techniques produced distinct effects on the chondroinductive capacity of CDM. Furthermore, the mechanical properties of CDM scaffolds were able to be enhanced by increasing the CDM concentration; however, this led to a concomitant decrease in pore size, which limited cellular infiltration. The pore size was able to be rescued through the use of an ice-templating technique that led to the formation of large aligned grooves, which enabled cellular infiltration. Additionally, a decellularization protocol was developed that successfully removed foreign DNA to the same order of magnitude as clinically approved materials, while preserving the native GAG content of the CDM, which has been shown to be critical in preserving the mechanical properties of the CDM. Altogether, this body of work demonstrated that dehydrothermal crosslinking was best suited for maintaining the chondroinductive capacity of the CDM, and given the appropriate scaffold fabrication parameters, such as CDM concentration and ice-templating technique, dehydrothermal treatment was able to confer mechanical properties that prevented cell-mediated contraction. To emphasize this finding, this work culminated in the fabrication of an anatomically-relevant hemispherical scaffold entirely from CDM alone. The CDM hemispheres not only supported chondrogenic differentiation, but also retained the original scaffold dimensions and shape throughout chondrogenic culture. These findings illustrate that CDM is a promising material for the fabrication of tailor-made scaffolds for cartilage tissue engineering.