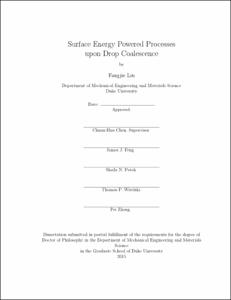 Surface energy-powered motion is useful for a variety of autonomous functions such as passive cooling and self-cleaning, where independence from external forces is highly desirable. Drop coalescence offers a convenient process to release surface energy, which can be harvested to power self-propelled fluid motion.

On superhydrophobic surfaces, out-of-plane jumping motion spontaneously results from drop coalescence. However, less than 4\% of the released surface energy is converted to useful kinetic energy giving rise to the jumping motion. Using three-dimensional interfacial flow simulations that are experimentally validated, we elucidate the mechanism of low energy conversion efficiency. The non-wetting substrate interferes with the expanding liquid bridge between the coalescing drops at a relatively late stage, forcing a small fraction of the merged drop to "bounce" back from the non-wetting substrate. The substrate breaks the symmetry of surface energy release, leading to self-propelled jumping that is perpendicular to the solid substrate. The intercepting substrate imparts a relatively small translational momentum on the overall merged drop, giving rise to a small energy conversion efficiency.

This mechanistic understanding has provided guidance on how to increase the energy conversion efficiency by changing the geometry of the intercepting solid surface, e.g. to a pillared substrate which has additional intercepting planes, or to a cylindrical fiber which interferes with the coalescence process at a much earlier stage. These topographical changes have already led to a 10-fold increase in energy conversion efficiency. The directional control of surface energy-powered motion is achieved by breaking the symmetry of oscillations induced by drop coalescence, such as by adding additional intercepting planes on pillared substrates. The work has applications ranging from self-sustained dropwise condensers, drop coalescers to ballistospore discharge in some fungi species in nature.

The ballistospore discharge process is powered by surface energy released from the coalescence between a spherical Buller's drop and an adaxial drop on the spore. The disturbance to the adaxial drop from coalescing Buller's drop results in the capillary-inertial oscillations of the liquid system. The oscillations redirect the mass and momentum transfer and yields a tensile force along the adaxial direction with negligible momentums in other directions, ensuring the preferable launching along the adaxial direction. The findings offer insights for applications of biomimicry involving self-propelled jumping with payloads which takes advantage of the high power density of the process.