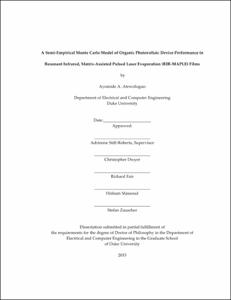 Utilizing the power of Monte Carlo simulations, a novel, semi-empirical method for investigating the performance of organic photovoltaics (OPVs) in resonant infrared, matrix-assisted pulsed laser evaporation (RIR-MAPLE) films is explored. Emulsion-based RIR-MAPLE offers a unique and powerful alternative to solution processing in depositing organic materials for use in solar cells: in particular, its usefulness in controlling the nanoscale morphology of organic thin films and the potential for creating novel hetero-structures make it a suitable experimental backdrop for investigating trends through simulation and gaining a better understanding of how different thin film characteristics impact OPV device performance.

The work presented in this dissertation explores the creation of a simulation tool that relies heavily on measureable properties of RIR-MAPLE films that impact efficiency and can be used to inform film deposition and dictate the paths for future improvements in OPV devices. The original nanoscale implementation of the Monte Carlo method for investigating OPV performance is transformed to enable direct comparison between simulation and experimental external quantum efficiency results. Next, a unique microscale formulation of the Dynamic Monte Carlo (DMC) model is developed based on the observable, fundamental differences between the morphologies of RIR-MAPLE and solution-processed bulk heterojunction (BHJ) films. This microscale model enables us to examine the sensitivity of device performance to various structural and electronic properties of the devices. Specifically, using confocal microscopy, we obtain an average microscale feature size for the RIR-MAPLE P3HT:PC61BM (1:1) BHJ system that represents a strategic starting point for utilizing the DMC as an empirical tool.

Building on this, the RIR-MAPLE P3HT:PC61BM OPV system is studied using input simulation parameters obtained from films with different material ratios and overall device structures based on characterization techniques such as grazing incidence-wide angle X-ray scattering (GI-WAXS) and X-ray photoelectron spectroscopy (XPS). The results from the microscale DMC simulation compare favorably to experimental data and allow us to articulate a well-informed critique on the strengths and limitations of the model as a predictive tool. The DMC is then used to analyze a different RIR-MAPLE BHJ system: PCPDTBT:PC71BM, where the deposition technique itself is investigated for differences in the primary solvents used during film deposition.

Finally, a multi-scale DMC model is introduced where morphology measurements taken at two different size scales, as well as structural and electrical characterization, provide a template that mimics the operation of OPVs. This final, semi-empirical tool presents a unique simulation opportunity for exploring the different properties of RIR-MAPLE deposited OPVs, their effects on OPV performance and potential design routes for improving device efficiencies.