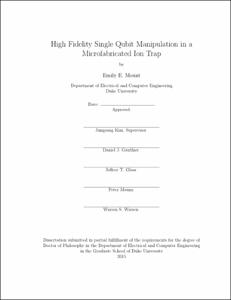 The trapped atomic ion qubits feature desirable properties for use in a quantum computer such as long coherence times, high qubit readout fidelity, and universal logic gates. While these essential properties have been demonstrated, the ability to scale a trapped ion quantum system has not yet been shown. The challenge of scaling the system calls for methods to realize high-fidelity logic gates in scalable trap structures. Surface electrode ion traps, that are microfabricated from a silicon substrate, provide a scalable platform for trapping ion qubits only if high-fidelity operations are achievable in these structures. Here, we present a system for trapping and manipulating ions in a scalable surface trap. Trapping times exceeding 20 minutes without laser cooling, and heating rates as low as 0.8 quanta/ms indicate stable trapping conditions in these microtraps. Coherence times of more than one second verify adequate qubit and control field stability. We demonstrate low-error single-qubit gates performed using stimulated Raman transitions driven by lasers that are tightly focused on the ion qubit. Digital feedback loops are implemented to control the driving field's amplitude and frequency. Gate errors are measured using a randomized benchmarking protocol for single qubit gates, where residual amplitude error in the control beam is compensated using various pulse sequence techniques. Using pulse compensation, we demonstrate single qubit gates with an average error per randomized Clifford group gate of $3.6(3)\times10^{-4}$, which is below the fault-tolerant threshold for some error-correction schemes.