The Global Epidemic of Childhood Obesity and Its Non-medical Costs 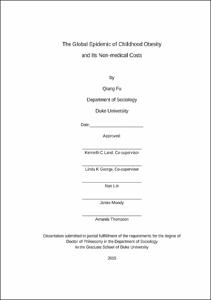