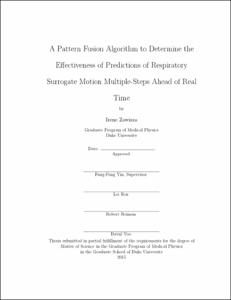 Purpose: Ensuring that tumor motion is within the radiation field for high-dose and high-precision radiosurgery in areas greatly influenced by respiratory motion. Therefore tracking the target or gating the radiation beam by using real-time imaging and surrogate motion monitoring methods are employed. However, these methods cannot be used to depict the effect of respiratory motion on tumor deviation. Therefore, an investigation of parameters for method predicting the tumor motion induced by respiratory motion multiple steps ahead of real time is performed. Currently, algorithms exist to make predictions about future real-time events, however these methods are tedious or unable to predict far enough in advance.

Methods and Materials: The algorithm takes data collected from the Varian RPM$ System, which is a one-dimensional (1D) surrogate signal of amplitude versus time. After the 1D surrogate signal is obtained, the algorithm determines on average what an approximate respiratory cycle is over the entire signal using a rising edge function. The signal is further dividing it into three components: (a) training component is the core portion of the data set which is further divided into subcomponents of length equal to the input component; (b) input component serves as the parameter searched for throughout the training component, (c) analysis component used as a validation against the prediction. The prediction algorithm consists of three major steps: (1) extracting top-ranked subcomponents from training component which best-match the input component; (2) calculating weighting factors from these best-matched subcomponents; (3) collecting the proceeding optimal subcomponent and fusing them with assigned weighting factors to form prediction. The prediction algorithm was examined for several patients, and its performance is assessed based on the correlation and root mean square error (RMSE) between prediction and known output.

Results: Respiratory motion data was simulated for 30 cases and 555 patients and phantoms using the RPM system. Simulations were used to optimize prediction algorithm parameters. The simulation cases were used to determine optimal filters for smoothing and number of top-ranked subcomponents to determine optimal subcomponents for prediction. Summed difference results in a value of 0.4770 for the 15 Point Savitzky-Golay filter.

Conclusions: In conclusion, the number of subcomponents used for prediction may be better determined based on individual breathing pattern. The prediction accuracy using patient data is better using half cycle prediction over full cycle prediction for all algorithms for the majority of methods tested. Finally, relative weighting method performed better than other methods.