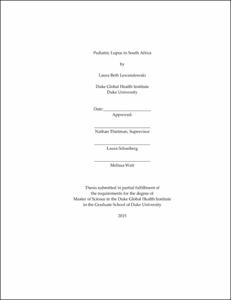 Background: In North America and Europe, SLE is more common and severe in people of African extraction than in Caucasians; however, the epidemiology of SLE in Africa is largely undetermined. Historically, the incidence of SLE in Africa was presumed to be low, but recent studies challenge this theory. In general, children present with higher disease activity, require more therapy, and accrue more organ damage than adult-onset patients. Although African children with SLE may be at high risk for poor outcomes, little research has investigated this population. We have initiated the first registry of this high risk pediatric SLE (pSLE) population in South Africa (SA). Here, we report the initial findings of the South African pSLE patients (PULSE cohort).

Results: Initial review of patients yielded 72 patients (age 11.5; 83% female). The racial distribution was 68% colored, 26% black, 5% white, and 3% Asian/Indian. Most patients presented with severe lupus nephritis (LN) (renal biopsy performed in 58%)). Of patients with LN, 93% presented with ISN class III or higher. Within the SA cohort, 13% went on to develop ESRD, of which 9% required transplant, strikingly higher than NA peers. There were treatment differences between cohorts: patients in the North American cohort had increased use of MMF and biologic therapies. The SA cohort had severe disease at diagnosis (mean SLEDAI 20.6), compared to the NA pSLE cohort (SLEDAI 4.8). Also, the PULSE cohort had end organ damage with 63% of the cohort having a SLICC score >0 (mean SLICC 1.9), compared to only 23% in a previously reported US cohort of 221 pSLE patients.

Conclusions: The PULSE cohort is the largest registry of pSLE patients in Africa to date. These children present with high disease activity and progress to end organ damage at higher rates than pSLE cohorts in developed nations. Further research is required to determine the risk factors for poor outcomes in this high risk population.