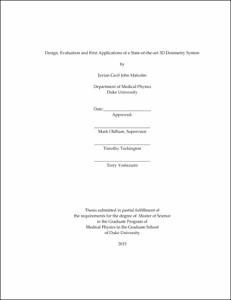 The system, termed PMOS, was designed utilizing a parallel ray geometry instigated by precision telecentric lenses and an 630 nm LED light source. Using PRESAGE® radiochromic dosimeters, a 3D dosimetric comparison with our gold-standard system and treatment planning software (Eclipse®) was performed for a four-field box treatment (8 Gy per fraction), under gamma passing criteria of 3 %/3 mm/10 % dose threshold. Post off-site installation, deviations in the system's dose readout performance was assessed by rescanning the four-field box irradiated dosimeter and using line-profiles to compare on-site and off-site mean and noise levels in four distinct dose regions. As a final step, an end-to-end test of the system was completed at the off-site location, including CT-simulation, irradiation of the dosimeter and a 3D dosimetric comparison of the planned dose (Pinnacle3) to delivered dose for a spinal SBRT treatment(12 Gy per fraction).

The gamma pass rate for the 3D gamma comparison between the PMOS and our gold-standard Duke Large Optical Scanner (DLOS) dose distribution was 99.1% under (3 %, 2mm, 5 % threshold) criteria. Under 3 %, 1mm, 5 % threshold, the gamma comparison between the systems was 95.6 %. Using line profiles, the dose difference between the readout of the PMOS at Duke and PMCC for the same irradiated dosimeter was between 0-1 Gy. At 1mm reconstructed dose voxels, the gamma pass rate was 95. 27% (3 %, 2 mm, 5 % threshold) for the gamma comparison between the measured PMOS and calculate Pinnacle3 dose distribution. The majority of the failing voxels of the gamma map were in the high dose regions of the dose distribution. By rescanning the dosimeter in the DLOS, the PMOS' dose readout was ruled out as the source of the high dose (>14Gy) disagreement. The sensitivity of the PRESAGE® dosimeter and the parameters for the Pinnacle3 dose calculation will be further investigated as possible sources for the error.

This work will describe the end-to-end process and results of designing, installing, and commissioning a state-of-the-art 3D dosimetry system created for verification of advanced radiation treatments including spinal radiosurgery.

As an initial step towards this goal, I worked on a related project to evaluate a prototype of our in-house 3D dosimetry system using Fresnel lens and a `solid tank' made of PRESAGE® like material.